A Roosevelt in London

A visit to Sagamore Hill on Long Island, New York – the beloved home of President Theodore Roosevelt – offers a plethora of fascinating glimpses into the family, career, and life of this compelling figure in American history. While recently exploring the museum, a particular item immediately caught my attention – activating my apparent radar for anything Union Jack! On 31st May 1910, Theodore Roosevelt was a guest of the City of London, formally presented at the Guildhall with a certificate naming him an Honorary Citizen of the City of London as well as a magnificent gold and jeweled casket. 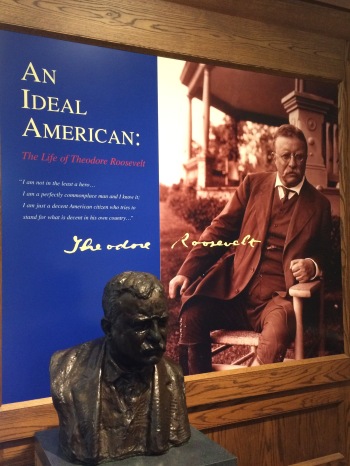 The 26th President of the United States, Theodore Roosevelt.

Commonly referred to as the presentation of “the freedom of the city,” this centuries-old ceremony was conducted whenever a head of state or other distinguished person visited England. According to a period local U.S. newspaper*, this occasion “afforded the population of the metropolis [London] an opportunity of manifesting with spontaneous good-will their friendly sentiments toward the United States.” The front and reverse sides of the stunning casket are divided into four panels containing enamel paintings of London’s Guildhall, the Mansion House, St Paul’s Cathedral, and Tower Bridge. The space between the two front panels showcases the arms of the Corporation of the City of London, placed above an ornamental shield bearing an engraved inscription commemorating Roosevelt and this special occasion. 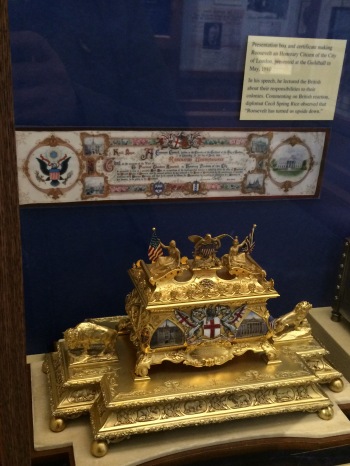 Certificate and casket presented to Mr. Roosevelt at London’s Guildhall, May 1910.

Rich with symbolism, the gift displays an equal representation of both cultures and governments. Seated at either end of the casket’s lid are two beautiful figures – one symbolizing Britannia (holding the Union Jack), the other symbolizing America (holding the Stars and Stripes). In addition, the base contains a gilded British lion as well as a gilded American bison. Upon each of the four corners of the casket, enameled shields showcase the arms of Great Britain, the City of London, the Union Jack, and the United States of America. It is a truly stunning piece of preserved history made even more interesting (and meaningful!) with its British connection. 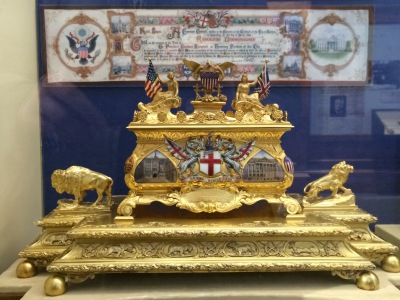 Spectacular workmanship and stunning symbolism celebrating both Britannia and America.

Like Loading...
This entry was posted in Curiouser and Curiouser! By Meghan McKillop, Home Page Posts. Bookmark the permalink.

4 Responses to A Roosevelt in London