Welcome To The Award-Winning

Former BBC Comedy star, Kelly Monteith and Host/Entertainer Paul Boland, review the best in classic British films – and films that feature British talent – all while enjoying a glass (or three) of Two Buck Chuck. Or, as one would say in Britain, ‘Two Quid Charles”.  Don’t forget to suggest future films you’d like to see us review! PLUS Check Out our NEW “Movie Night with BritFlix”: Full movies followed by our reviews!

Kelly Monteith, Paul Boland and Two Buck Chuck take a look at Sam Mendes epic film 1917. April 6th, 1917. As a regiment assembles to wage war deep in enemy territory, two soldiers are assigned to race against time and deliver a message that will stop 1,600 men from walking straight into a deadly trap.

The Brit Flix Guys take a look at Jojo Rabbit is a 2019 American comedy-drama film written and directed by Taika Waititi, based on Christine Leunens’s book Caging Skies. Roman Griffin Davis portrays the title character, Johannes “Jojo” Betzler, a Hitler Youth member who finds out his mother (Scarlett Johansson) is hiding a Jewish girl (Thomasin McKenzie) in their attic. He must then question his beliefs, while dealing with the intervention of his imaginary friend, a fanciful version of Adolf Hitler (Waititi) with a comedic stand on politics of the war. The film also stars Rebel Wilson, Stephen Merchant, Alfie Allen, and Sam Rockwell.

Set in postwar Vienna, Austria, “The Third Man” stars Joseph Cotten as Holly Martins, a writer of pulp Westerns, who arrives penniless as a guest of his childhood chum Harry Lime (Orson Welles), only to find him dead. Martins develops a conspiracy theory after learning of a “third man” present at the time of Harry’s death, running into interference from British officer Maj. Calloway (Trevor Howard) and falling head-over-heels for Harry’s grief-stricken lover, Anna (Alida Valli). 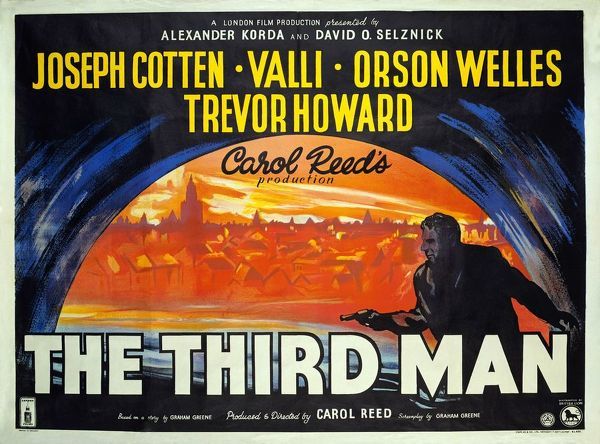 BRIT FLIX: A NIGHT AT THE MOVIES “Sherlock Holmes and the Secret Weapon”

THANK YOU FOR YOUR CONSIDERATION!

Audrey Hepburn stars as Regina Lampert, a woman who falls for a dashing Peter Joshua, played by Cary Grant, on a skiing holiday in the French Alps, then discovers upon her return to Paris that her husband has been murdered. Soon, she and Peter are giving chase to three of her late husband’s World War II cronies, Tex (James Coburn), Scobie (George Kennedy) and Gideon (Ned Glass), who are after a quarter of a million dollars the quartet stole while behind enemy lines. But why does Peter keep changing his name? Paul and Kelly discuss this 1963 classic directed by Stanley Donen. 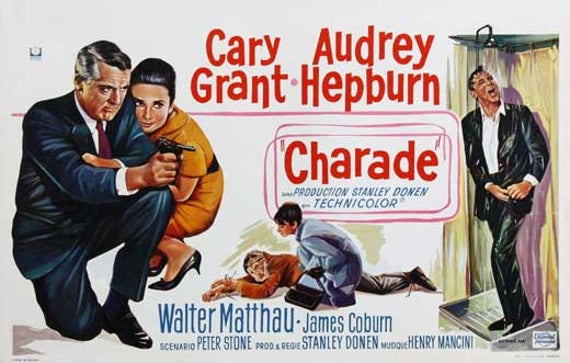 The Ladykillers is a 1955 British black comedy crime film directed by Alexander Mackendrick for Ealing Studios. It stars Alec Guinness, Cecil Parker, Herbert Lom, Peter Sellers, Danny Green, Jack Warner and Katie Johnson as the old lady, Mrs. Wilberforce.William Rose wrote the screenplay,[1] for which he was nominated for an Academy Award for Writing Original Screenplay and won the BAFTA Award for Best British Screenplay. He claimed to have dreamt the entire film and merely had to remember the details when he awoke. 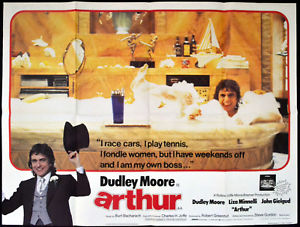 The Brit Flix Guys really enjoyed taking a look back at 1981’s Arthur. Written and directed by Steve Gordon. Starring Dudley Moore as the wealthy but lovable New York City playboy Arthur Bach who is perpetually drunk and completely rudderless. Dutifully supported by his sharp-tongued and quick-witted butler, Hobson – played brilliantly by John Gielgud who won the Oscar for Best Supporting Actor – Arthur reluctantly prepares to enter into an arranged marriage with heiress Susan Johnson (Jill Eikenberry). When he meets Linda Marolla (Liza Minnelli), a waitress from Queens, he falls head over heels in love, but if he backs out of his engagement with Susan, he may lose his fortune.

The Lavender Hill Mob is a 1951 from Ealing Studios, written by T. E. B. Clarke, directed by Charles Crichton, starring Alec Guinness and Stanley Holloway and featuring Sid James and Alfie Bass. The title refers to Lavender Hill, a street in Battersea, a district of South London, in the postcode district SW11, near to Clapham Junction railway station.

The British Film Institute ranked The Lavender Hill Mob the 17th greatest British film of all time. The original film was digitally restored and re-released to UK cinemas on 29 July 2011 to celebrate its 60th anniversary.

Join The Brit Flix Guys, Paul and Kelly, as they launch a NEW feature: Brit Flix: A Night @TheMovies where they will be streaming FULL movies! First up will be the classic 1946 Sherlock Holmes film, “Dressed To Kill” starring Basil Rathbone and Nigel Bruce. Also on the schedule will be Alfred Hitchcock’s “39 Steps” and the classic Cary Grant/Audrey Hepburn film, “Charade”. Grab a bucket of pop corn and join Kelly Monteith and Paul Boland as they uncork FULL movie versions of these classics.

It’s holiday time for the Brit Flix Guys and all is not mistletoe and egg nog for Kelly and Paul who seem to be on opposite sides of the opinion poll where “Love Actually” is concerned. Richard Curtis directs an all-star British cast in a story of nine intertwined lives which examine the complexities of the one emotion that connects us all: LOVE.  Hugh Grant, Emma Thompson, Alan Rickman, Liam Neeson, Colin Firth, Martine McCutcheon and Laura Linney (the lone American) make-up this incredibly talented cast. What does Paul and Kelly think of Love Actually? You won’t believe it!

An impoverished backward nation declares a war on the United States of America, hoping to lose, but things don’t go according to plan.

In this episode Kelly and Paul take a look at two Michael Powell classics.

“A Matter of Life and Death” and “Peeping Tom”

British Air Force pilot Peter Carter (David Niven) is on his way home to England from a World War II bombing mission in a badly damaged aircraft. Before he bails out of the plane into the ocean, he contacts June (Kim Hunter), an Allied radio operator with whom he shares what he believes to be his final moments on Earth. But Peter survives, finds June and they fall in love. A problem arises when a divine messenger (Marius Goring) arrives to escort Peter to heaven to rectify his wrongful survival.

Loner Mark Lewis (Carl Boehm) works at a film studio during the day and, at night, takes racy photographs of women. Also he’s making a documentary on fear, which involves recording the reactions of victims as he murders them. He befriends Helen (Anna Massey), the daughter of the family living in the apartment below his, and he tells her vaguely about the movie he is making. She sneaks into Mark’s apartment to watch it and is horrified by what she sees — especially when Mark catches her. 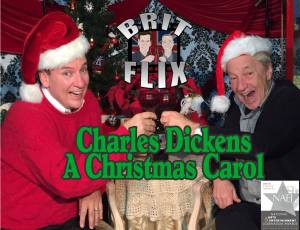 Crotchety Victorian businessman Ebenezer Scrooge (Alastair Sim) has no use for festivity, even at Christmas. After resentfully allowing timid clerk Bob Cratchit (Mervyn Johns) to have the holiday to spend with his loving wife (Hermione Baddeley) and family, Scrooge is swept into a nightmare. The ghost of his late partner, Jacob Marley (Michael Hordern), appears, warning that Ebenezer will be visited by three more spirits who will show the coldhearted man the error of his parsimonious behavior.

Two out-of-work actors…anxious, luckless Marwood (Paul McGann) and his acerbic alcoholic friend, Withnail (Richard E. Grant)…spend their days drifting between their squalid flat, the unemployment office and the pub. When they take a holiday ‘by mistake’ at the country house of Withnail’s flamboyantly gay uncle, Monty (Harry Potter’s Richard Griffiths), they encounter the unpleasant side of the English countryside: tedium, terrifying locals and torrential rain.

A comedic send-up of the grim circumstances of the Middle Ages as told through the story of King Arthur and framed by a modern-day murder investigation. When the mythical king of the Britons leads his knights on a quest for the Holy Grail, they face a wide array of horrors, including a persistent Black Knight, a three-headed giant, a cadre of shrubbery-challenged knights, the perilous Castle Anthrax, a killer rabbit, a house of virgins, and a handful of rude Frenchmen. 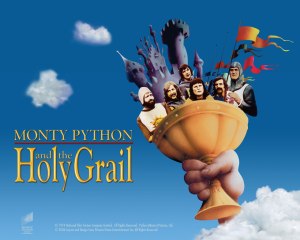 Tom Jones (Albert Finney), a bastard foundling raised by the kindly Squire Allworthy (George Devine), loves the beautiful Sophie Western (Susannah York), but cannot marry her due to the difference in their stations. When the villainous Blifil (David Warner) tricks the squire into casting Tom out of his household, the young man goes forth into the world on a series of high-spirited adventures, including heroic sword fights, mistaken identities, good deeds and lusty women.

Set in postwar London, “Alfie” features Michael Caine as a chauffeur bent on promiscuity. After impregnating his girlfriend he takes off on vacation. He continues his life of womanizing, but he can’t hide forever. A misfortune strikes and Alfie is forced to face the product of his ways.

Captain Henry St. James (Alec Guinness) heads a ferryboat that regularly moves between Gibraltar and North Africa, and he has a different life in each location. In Gibraltar, he is married to Maud (Celia Johnson), a subdued and dedicated housewife. In Morocco, he has another wife, the tempestuous Nita (Yvonne De Carlo), who enjoys the fast-paced nightlife. Henry enjoys this arrangement, with neither woman knowing of the other, until both women become dissatisfied with their one-sided lives.

What classic British film would you like to see The Brit Flix Guys review next? Comment below!

When his mother eloped with an Italian opera singer, Louis Mazzini (Dennis Price) was cut off from her aristocratic family. After the family refuses to let her be buried in the family mausoleum, Louis avenges his mother’s death by attempting to murder every family member (all played by Alec Guinness) who stands between himself and the family fortune. But when he finds himself torn between his longtime love (Joan Greenwood) and the widow of one of his victims (Valerie Hobson), his plans go awry.

A school that teaches one-upmanship enables a chronic loser (Ian Carmichael) to embarrass a rival (Terry-Thomas) and woo the woman he loves.

The Beatles in their feature film debut, one of the greatest rock-and-roll comedy adventures ever. The film has a fully restored negative and digitally restored soundtrack. The film takes on the just-left-of-reality style of mock-documentary, following “a day in the life” of John, Paul, George, and Ringo as fame takes them by storm.