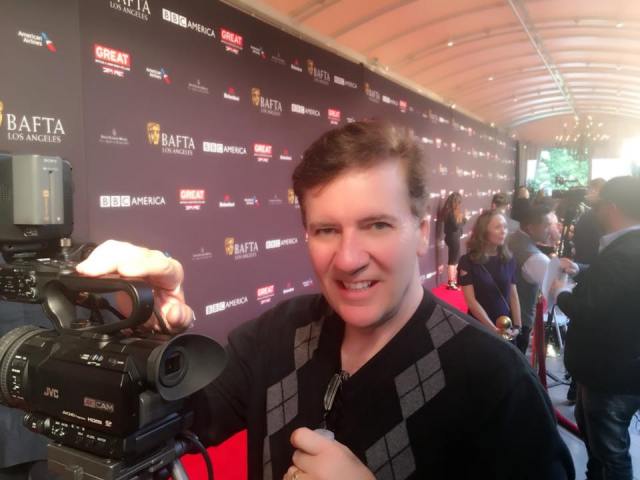 On The Red Carpet for BAFTA/LA Pre-Golden Globe event.

It’s been an interesting and exciting journey for Paul Boland, being an essential part of the creation of The Anglophile Channel. Without his creative vision as a director, original ideas as a writer, and timing and technique as an editor, The Anglophile Channel would not be the success that it is today.

To understand the origins of Paul’s innate creative sensibilities, one must delve deeper into Paul Boland, the “man behind the camera” and the one who may not be widely known by TAC fans but is known by audiences around the world…

When Paul is not co-producing, filming and editing for TAC he’s busy with his “day job” as an award-winning entertainer, a singer/impressionist who has been entertaining audiences for over 20 years.

“the greatest entertainer of this generation” ~ Wayne Newton

From the stages of Las Vegas to the world’s largest cruise ships, Boland’s (known as “The Man of 1001 Voices”) unique style of entertainment mixed with his ability to capture a crowd has set him apart from all others in his field.  Legendary entertainer and Las Vegas icon, Wayne Newton is supporter calling Paul a “class act” and “One of the greatest entertainers I know…” Check out highlights of his show here:

Having grown up in Massachusetts, Paul’s first passion was theater appearing in more than 40 plays including: Camelot (Lancelot), Guys and Dolls (Sky), Cabaret (Cliff), Funny Thing Happened On The Way To The Forum (Hero), Damn Yankees (Applegate), Bye Bye Birdie (Birdie) to name a few.

At the tender age of 8 Paul realized he had the unique gift of impersonating people. His first was President Lyndon Johnson. “I idolized guys like Rich Little and Frank Gorshin. I used to record movies and television shows to study their voices then I’d record my own voice doing the impressions. I never thought it was something you could make a career out of.”

At the Tonight Show with Jay Leno 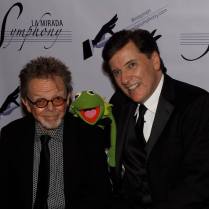 With Paul Williams and Kermit 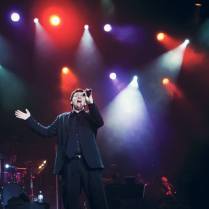 Paul decided to make the move to Los Angeles to pursue a career in entertainment, immediately getting cast in regional plays. But it was from job waiting tables, at the high profile Beverly Hills restaurant, Ed Debevics, that Paul got his first real break. Ed’s was a 1950’s diner which only hired actors as their waiters. “We had to show up in character at the interview. I came dressed as a nerd but was asked to come up with something different – so I started doing an impersonation of Jim Ignatowski (the character on the hit TV series, Taxi, played by Christopher Lloyd.) I was hired on the spot.” The job at Ed Debevics proved to be a good luck charm because after spending several months as “Iggy” 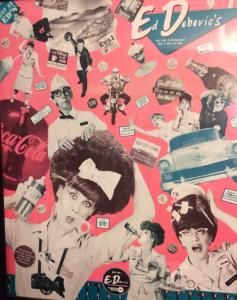 Paul was asked by the restaurant managers if he could be their “Elvis” for the 20th anniversary of Elvis’s death. Paul’s appearance as Elvis was such a hit that he transitioned from waiter to permanent entertainer at the now Hollywood hot spot, performing at private parties for the likes of Cher, Sylvester Stallone, Dudley Moore, Liza Minelli, Olivia Newton John, Princess Stephanie of Monaco and more.

Not content with simply playing Elvis, Paul began incorporating his impersonations into one of Elvis’s songs, “My Way”, which he’d sing in a dozen different voices. One night radio personality Rick Dees came in specifically to see Paul sing – having been previously recommended by his producer, Jay Wolpert, who had spotted Paul earlier in the week. Dees immediately asked Paul to be the first guest on this new television show, “Into The Night With Rick Dees.”

Paul went on to make several more appearances on Dees’s variety show as well as the television shows, Renegade, The Entertainer, Mike and Maty and Home & Family with Christina Ferrare and Michael Burger – where he was a regular guest.

Another Into The Night appearance, this time with singer Don Bruner

Paul went on to utilize his voice in another way, as the announcer on the CBS game show, Match Game and then The Price Is Right working with legendary television host, Bob Barker.

On the road, Paul has opened up for such stars as Ray Charles, Randy Travis and Wayne Newton

As a corporate entertainer, Paul Boland has been in much demand appearing for Fortune 500 companies such as Ford, General Motors, Mitsubishi, Microsoft, Boeing, Disney and more.

Paul’s incredible talents took him to the high seas where he became one of the most popular headline entertainers onboard luxury cruise lines, like Royal Caribbean, Cunard, Celebrity, Princess, Holland America and Crystal.  “It was a great way to travel and see the world,” says Boland, “I visited parts of the world I never imagined I’d see in person.”

When The Anglophile Channel was conceived, Paul knew there was one thing they were going to need: a cameraman and editor. With no budget and the help of some creative friends, Paul got up to speed on Final Cut Pro. “There were mistakes with the ‘on the job’ training, but it was always an exciting and creative process,” says Paul.  He also enjoyed the freedom of being in charge of his own creative project, directing according to his vision and collaborating with his wife, TAC founder/Executive Producer Marlise Boland.

Paul also took on hosting duties for TAC’s film review series, Brit Flix with Kelly, Paul and (Two Buck) Chuck, which he co-hosts with BBC comedy star, Kelly Monteith.  The pair critique classic British films while enjoying a glass or three of “Two Buck Chuck.” The Los Angeles Press Club honored Boland and Monteith with the Southern California Journalism Award for “Best Anchor/Host” whom they described as having a co-hosting chemistry “like fine wine.”

Check out episodes of : Kelly, Paul and (Two Buck) Chuck

Paul looks forward to the challenge of growing The Anglophile Channel which has plans to become a streaming service with original scripted programming. Often asked why he’s doing the laborious TAC when he could just as easily lay back on the Lido deck sipping margaritas and his answer is, “Quite simply, it’s the most creative time of my life. It’s not always easy, but it’s always fun and I get to work with my family!” What could be better than that.

Paul is currently in post-production on an original comedy web-series which he directed, filmed and edited, “The Real Geezers of Beverly Hills: Adjacent” which launches this fall on Amazon Prime Video.

He enjoys spending time with his family, watching baseball and westerns.

RETURN TO “ABOUT US” TO : MEET THE TAC TEAM