Benedict Cumberbatch and The Ice Bucket Challenge…To Be, or Not To Be?

Posted on August 21, 2014 by The Anglophile Channel

There seems to be a lot of speculation over reasons given of why Benedict Cumberbatch can not (or has not) done the ALS #IceBucketChallenge as nominated by Tom Hiddleston. Because I can only tell you what has personally been conveyed to us by his team….and I have no reason to doubt them…then that’s all we have to go by. We don’t actually know this man’s personal schedule.

Are you doubting me?

Heated discussions on why he hasn’t stepped up to the plate, within the apparent required 24-hour time frame, seem to insinuate that he’s not as busy as his team is telling us. Knowing what a global phenomenon this whole Ice Bucket Challenge has become, I really doubt the CumberCamp would try to avoid having their client participate. All I can say is this: whatever has Benedict so occupied is also keeping him from attending this weekend’s Emmy Awards where he is nominated in the Lead Actor category (Mini-series/Movie) for Sherlock:His Last Vow (from what we’ve been told he’s not attending, anyway…of course things can always change.) 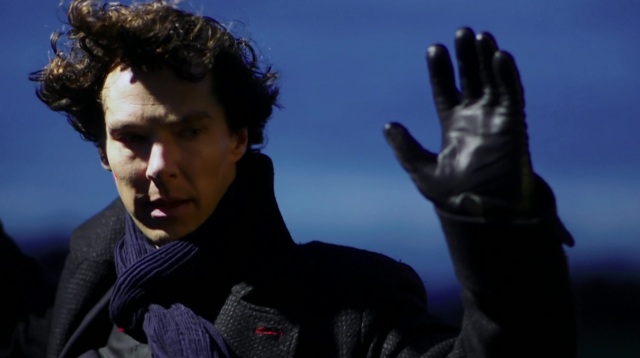 I actually believe Cumberbatch WOULD be at the Emmys, if at all possible, because lets face it from what we’ve seen of him this past year alone…. we know Cumberbatch doesn’t miss many events. He’s working non-stop! Whether prepping, filming, recording, traveling or promoting, Benedict Cumberbatch is one of the busiest guys I know in show business. His IMDB is piled high with film projects either in post or pre-production and that doesn’t even include additional projects such as The BBC‘s upcoming second Hollow Crown series which has Cumberbatch starring as Richard III, and goes before the cameras soon..or preparations for next year’s live appearance in the West End as Hamlet. When they say he’s busy…they’re not kidding. But I know for those chomping at the bit, “busy” is not an excuse.

What is sad to me is that getting lost in this heated discussion is the very reason why everyone is pouring a bucket of freezing cold ice water over their head in the first place and that is to bring awareness to a terrible disease that goes mainly unnoticed and is largely misunderstood. Sure it’s been fun to see all our favorite British hotties dousing themselves with water wearing nothing but the thinnest of white undershirts…I personally have the Tom Hiddleston video on a 24-hour loop…

But the #IceBucketChallenge was originally introduced as a creative way to raise awareness, and funds for Amyotrophic Lateral Sclerosis (ALS) which is a progressive neurodegenerative disease that affects nerve cells in the brain and the spinal cord. Motor neurons reach from the brain to the spinal cord and from the spinal cord to the muscles throughout the body. The progressive degeneration of the motor neurons in ALS eventually leads to their death. When the motor neurons  die, the ability of the brain to initiate and control muscle movement is lost. With voluntary muscle action progressively affected, patients in the later stages of the disease may become totally paralyzed. Over 30,000 Americans suffer from this disease at any given time.

The 24-hour time limitation on the challenge is unfortunate because it puts pressure on people who might otherwise be well-intentioned but if they don’t act swiftly they’re immediately chastised…and then it becomes more about why that person has not accepted the challenge rather than what the challenge was for in the first place.

But the Cumber Collective can rest easy (of course they’ve never doubted…) as well as the CumberCritics, because Benedict’s Sunny March producing partner @adamackland recently Tweeted “Chill ya boots…it’s coming” which, I imagine, can only be referring to the heat the CumberCamp is getting for why Benedict hasn’t risen to Hiddleston’s challenge.

So let’s give the guy the benefit of the doubt. And while we’re waiting with baited breath to see the Cumberbabe dripping wet in a see-through white shirt…lets consider donating even the smallest amount to a great and worthy cause!

Lady Anglophile…an ALS Supporter and not one ice cube hit my tiara!

Like Loading...
This entry was posted in Home Page Posts, The CumberWatch and tagged Benedict Cumberbatch, Ice Bucket Challenge. Bookmark the permalink.

10 Responses to Benedict Cumberbatch and The Ice Bucket Challenge…To Be, or Not To Be?