Richard Armitage’s Next Gig: Role Of A Life Time, Cameo…or Both?

Posted on August 22, 2014 by The Anglophile Channel

Well the Armitage Army and Internet are all abuzz over a few hints recently dropped by Richard Armitage that he may have just auditioned for the “role of a lifetime”. The admission came during an interview with The Hindu when their reporter wondered aloud if there was a ‘once-in-a-lifetime role his heart desired’ to which Armitage (quite carefully) replied, “Ye-es, there is….and I may have just auditioned for it.”

Hmm, tantalizing indeed! Especially for those of us that have already seen him chew up the scenery with his much hailed performance as John Proctor in The Crucible at The Old Vic in London, and know EXACTLY what this actor is capable of artistically!

Soul-shattering performance in The Crucible…Hollywood would BE so lucky to score this kind of talent!

Then, another piece of the puzzle was unearthed during an Into The Storm press junket interview with Digital Spy where Armitage revealed that after he’s completed his run in The Crucible he’ll be doing another film…but added, “I can’t tell you what it is. But you’ll know! It’s a little cameo in something…”

OK, so…lets dissect this a bit, because you haven’t earned your “Fangirl” badge until you’ve contemplated absolutely every soundbite or quote you’ve ever heard come out of your obsession’s mouth…and in the end wondered how it could affect and/or involve you! 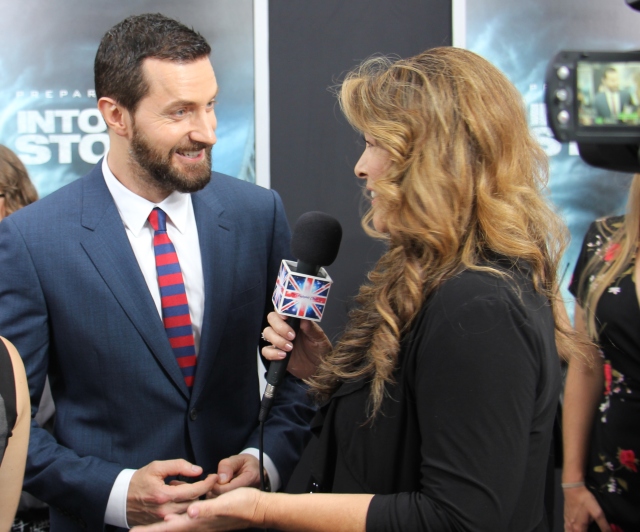 SO First: In both interviews, is he talking about the SAME role in the same project?  I’m not sure a “cameo” can be qualified as the “role of a lifetime”…unless it’s in an extremely highly visible project helmed by a legendary director or, at the very least, starring a pedigreed A-lister movie star…and I’ve got a few thoughts on that. In each interview he intimates that if he does get the role we will read all about it…meaning this project is SO big….his being cast in it will make the showbiz headline news! Oh Yipee!

You can’t IMAGINE all the ideas I have swirling around in my armchair-casting director’s brain right now. Or, for that matter in my actress brain….I mean, he must be in need a leading lady…right? Even for just a cameo! “WHO can I get my 8×10 to, pronto?”

Digital Spy has a few guesses one of them being Spooks: The Greater Good starring Kit Harington and Jennifer Ehle, (my personal favorite Elizabeth Bennett) which connects to Armitage because he played Lucas North in the BBC series Spooks (later renamed MI-5.)

As Lucas North in MI-5/Spooks

But North dies in Series 9 and to be honest, I don’t think coming back as this character, even in flashback, could be ‘deemed’ the role of a lifetime after you’ve bared your soul in Arthur Miller’s greatest works. And Spooks wasn’t a big enough hit internationally that Variety would be blasting the casting news all over its front page. Add to that…Spooks is already in post.

Avengers: Age of Ultron is also in post and again unless Heinz Kruger (Richard’s original character from the first Avengers film) comes back from the dead and is suddenly transformed into…I don’t know…the new Batman?…I don’t think it would make headlines. (Don’t judge my reference by the way…I’m not a big Marvel fan. I have no idea one superhero from the next…) (OK, Batman is DC Comics…I looked it up.)

Yeah, I can picture him in a superhero mask…
(Photo edit JonathanRudolph)

My fantasy of course is BOND. Who wouldn’t want to see this gorgeous, tall drink of British water in an Armani tux holding a martini glass and alluringly saying “Bond. James Bond”? This one has always seemed like a no-brainer to me…but then I pride myself for having more imagination than most Hollywood casting directors. (OHMYGAWD, I’m going to raise the funding myself and get this movie greenlit NOW!)  However, as Daniel Craig isn’t quite ready to hang up his guns and gadgets yet…this scenario is highly unlikely. Bummer. And me all ready to play the next Bond Girl….

He had dark, rather cruel good looks and very clear, blue-grey eyes.” – Do you think Fleming was describing Armitage? I do! (Photo: Tumblr/MichaelBond)

So lets look at what projects are actually in pre-production and/or filming…starting with the ‘biggie’ we ALL know is currently shooting (and constantly casting!):

STAR WARS: (Dec. 2015) Directed by J.J Abrams and Starring Harrison Ford and the whole gang from the original 1977 blockbuster. But that’s about all we know. This production is such a closely guarded secret that we have no idea what the film is even about with the exception of a few ‘leaked’ tidbits about Harrison Ford‘s costumes. We can’t even say who Armitage’s fellow Hobbit castmate, Andy Serkis, is playing! We do know that Armitage has a history with Star Wars because he played a bit role in Star Wars: Episode 1-The Phantom Menance.

I spy with my little eye…a future star!

Wouldn’t it be great if he came back in a significant, plot-affecting role that became the turning point of the whole Star Wars saga? Maybe he’s Hans Solo and Princess Leia’s son…Anakin Solo? He’s the right age-range for it. Wouldn’t THAT be cool? We’re certainly not going to get any hints from Abrams and company as Pinewood Studios has tighter security than the Pentagon.

Beverly Hills Cop (March 2016) The new film brings detective Axel Foley back to Detroit during the coldest winter on record. Detroit and bad weather. Been there done that.  By the way, GO SEE INTO THE STORM if you haven’t already! It’s amazing! 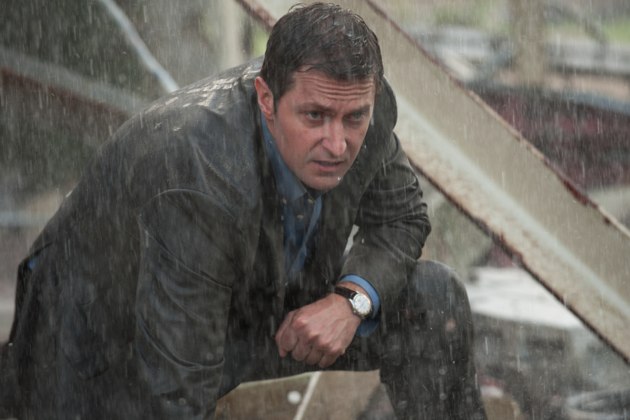 The Revenant (Dec 2015) Centers on the 1820s’ story of a frontiersman, Hugh Glass, who set out on a path of vengeance against those who left him for dead after a bear mauling. Casting has already been announced with Tom Hardy and Leo DiCaprio so unless one of them falls out…

Untitled Tom Hanks/Cold War Thriller Project (October 2015) Tom Hanks is attached to play James Donovan, a prominent American attorney enlisted by the CIA during the Cold War to slip behind the Iron Curtain and tortured when his U-2 spy plane is shot down over Russia. Now this is a project Armitage might be able to sink his teeth into depending on what the other roles are. I vote for this one only with Armitage as Donovan. (Hanks can direct if he’d like. Someone get me his agent on the phone…)

He does ‘torture’ well.
(Photo via RichardArmitageNet.com)

King Arthur (July 2016) Sixth century king, King Arthur, defends Britain against Saxon invaders. Idris Elba is rumored but…what if?? I like this possibility as well. And I’d be the perfect Guinevere. Cate Blanchett can just sit this one out…

Batman v Superman: Dawn of Justice (March 2016 ) Already filming with Ben Affleck as Batman and Henry Cavill as Superman but the actor listed to play Aquaman is just ‘rumored’…but would it be cruel to offer Armitage the role of Aquaman knowing his aversion to water? Hmm, but he looks so damn good soaking wet. Maybe we can put him under hypnosis to help him get over it….

Ben Hur (Feb 2016) Okay, I’m going to TRY and not excited about THIS possibility. Yes The Hollywood Reporter recently posted that Tom Hiddleston is currently the front runner to play Judah Ben-Hur but what if he DOESN’T get the role and it goes to Armitage instead? {Squee!}} OR…perhaps Armitage is being considered for the role of Ben-Hur’s friend and later nemisis, Messala. Ohhh-kay,  I’m trying not to picture Armitage in a toga just yet!…but I’ll be the FIRST to host a Roman-Themed party if it does happen. I vote for this one! Armitage would kick butt in the chariot races….

There are SOO many more possibilities of exactly what this ‘role of a lifetime’ and/or ‘cameo’ might be, but I guess we’re just going to have to wait till the big announcement comes from Armitage himself…or THR. In the meantime, I shall dream of the Gone With The Wind remake starring me as Scarlett O’Hara and Richard as Rhett Butler. Afterall, tomorrow is another day! 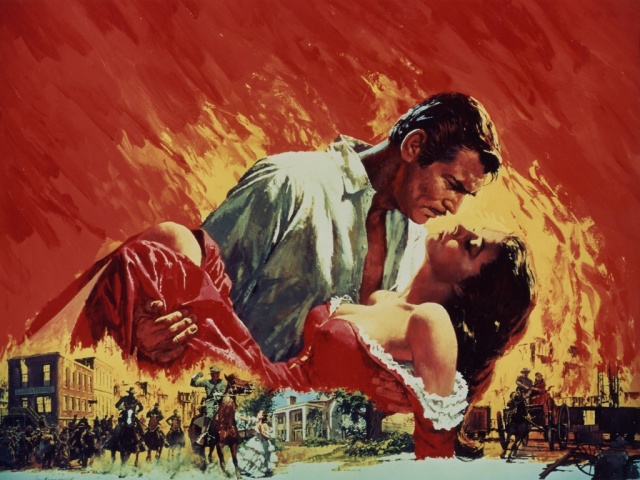 I can picture it…can you?

Lady Anglophile….Ready For Her Close-Up!

Like Loading...
This entry was posted in Armitage Alerts!, Home Page Posts, Lady Anglophile Reviews & Other Bits and Bobs and tagged Richard Armitage. Bookmark the permalink.

13 Responses to Richard Armitage’s Next Gig: Role Of A Life Time, Cameo…or Both?