The Importance Of Being Earnest At Madeline Garden

Posted on February 15, 2018 by The Anglophile Channel

The Importance of Being Earnest has long been my favourite comedy. The clever 413 Project Theater has found a way to make Oscar Wilde’s most enchanting play even more tempting. They combine the show with a formal tea in a gorgeous space, and make the whole experience a splendid evening out.

Pasadena’s Madeline Garden has a fairy lighted courtyard where we were greeted and led inside to our table. It was hard not to get sidetracked peering into the other rooms along the way, and we confess to snooping around during intermission. Madeline Garden is located in the 1927 Cheesewright Studios Building which is the cornerstone of Pasadena’s historic Green Street Village.  The building has a fascinating history. We always manage to find the Anglophile connection! Edgar Cheesewright, an Englishman, was a fashionable designer of the period whose work can be found in the White House, Hearst Castle and Greystone Manor. The Great Depression saw the building go into disrepair and disrepute, but it was brought back to use just before WWII by the U.S. Naval Research Bureau for military intelligence projects.

A tunnel was built to connect the Cheesewright Studio building to CalTech, and it is said that Albert Einstein had a secret laboratory in the basement and the tunnel allowed him to travel back and forth unnoticed. 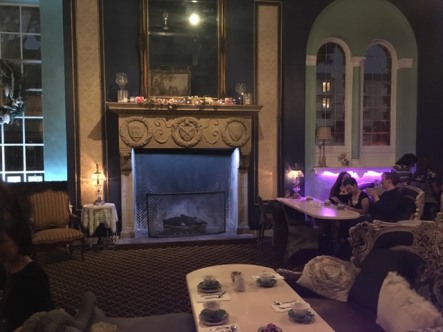 No wonder there is an aura of drama in the air well before the first act! The building was sold in 1983 and now has residences on the upper floors and a stunning bistro and tea room at ground level. It is truly lovely.

The atmosphere is set, lively upbeat 1920’s music is helping the audience get in the mood for the show and first two courses and tea are served well before the performance begins. That was nice planning as we had some time to get settled in, chat and admire the room. The playing space is in front of an impressive fireplace. When the lights dim we are transported to Algernon Moncrieff’s morning room in Half-Moon Street and are introduced to our two protagonists. It wouldn’t be Oscar Wilde if fates and circumstances didn’t become increasingly complicated, but it is clear to the audience where the action is headed and that, and along with the brilliantly witty script, is where most of the comedy lies. Noah Khyle is stellar in his portrayal of  charming, decadent Algernon, and Kyle Decamp, as his more grounded counterpart John Worthing, plays the part quite earnestly. (Sorry!) It is amusing to see their interplay as the exposition unfolds in the first act. I eagerly awaited the tea scene between Gwendolyn and Cecily.  It was fabulously fun and all the more engaging as we were all seated at this inharmoniously hilarious tea table watching the sugar get dumped into dismayed Gwendolyn’s teacup and seeing the huge slice of cake being passed by jealously arch Cecily, knowing full well she was asked for bread and butter. 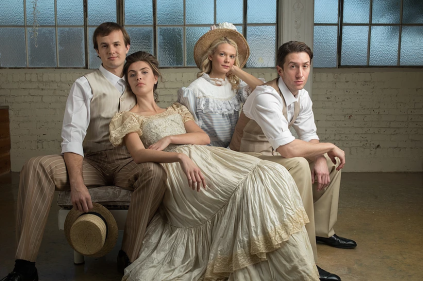 Caroline Pitts as lovely, determined Gwendolyn Fairfax and Annabelle Borke (who also directed) as beautiful, imaginative Cecily Cardew bring a champagne sparkle to their roles and we cheer their most civilized of skirmishes as they go from fast friends, to rivals, to sisters-in-arms. Comic musical touches underline the monologues, a quick wink to the 2002 film with a chorus of “Lady Come Down” and the couple’s adorable chase through the room brought smiles all around. Tamarah Ashton (no relation) was, indeed, “a gorgon” as stentorian Lady Bracknell. Dr. James Borke is the stolid, dependable manservant Merriman. Eric Ryan jumps into two roles, both butler Lane and Reverend Chasuble. He has a slight Rowan Atkinson vibe, with a smirk to the crowd that invited us all in on the jokes, particularly when he played Reverend Chasuble. When he and proper, uptight woman-with-a-secret Miss Prism, played with aplomb by Angela Beyer (who we must say, rose triumphantly over her wig) announce “at last”, you think, wow, THAT would be a sequel!

The comic timing is excellent. The staging and set changes are simple, which is all one needs in these plush surroundings. The period costumes are lovely. There is a lightness and ease to the production, which makes for an enjoyable show. The entire cast cast is energetic, focused, superbly entertaining and, the play is, overall, an absolute delight.

The tea, however, had it’s problems. Before any liquids were served, little warm scones, a tiny dish of jam and lightly sweetened cream cheese blend standing in for clotted cream were on the table.

We couldn’t begin to nibble the scones before we had a steaming cup in our hands! Madeline Garden serves one pot for two people, which is fine if you both want the same kind of tea. There is a surcharge if you and your tea buddy want different teas which seems a strange rule as you pay an individual ticket price. You are offered am uninspired choice of black, green, or herbal tea. The black tea, which was our choice, had a bit of a lemon flavour. Our pot was refreshed later in the evening. You are also able to purchase alcohol as an addition to your meal. Tepid but tasty tomato soup arrived next and was popped onto our sticky scone plates which we were expected to keep for the whole meal. The lights went down and the tiered trays were brought out later during the action of the play.

Could they not have waited for a scene break? Bless the actors, none of them missed a beat with all the distraction, but it isn’t fair to the audience. We couldn’t ask questions about what was served and tried to figure out what were eating and what I, as a vegetarian, had to avoid. There were many savouries as this is an evening tea, and though the—and please understand, these are just guesses– sausage balls, chicken concoction, sun dried tomato basil quiche, potato veggie combo, and “curried matter” on toast were, for the most part, very good tasting if not terribly hot, the guesswork took one out of the action of the play.

The sweets on the top tier were a scrumptious pair of macarons and a red velvet-ish bit of cake topped with a minty cream which didn’t really work together. We missed the sandwich course and wished for more of the tiny, buttery scones with a touch of coconut that were served first. Our waiter was very nice and took time after the show to tell us about the history of the building. 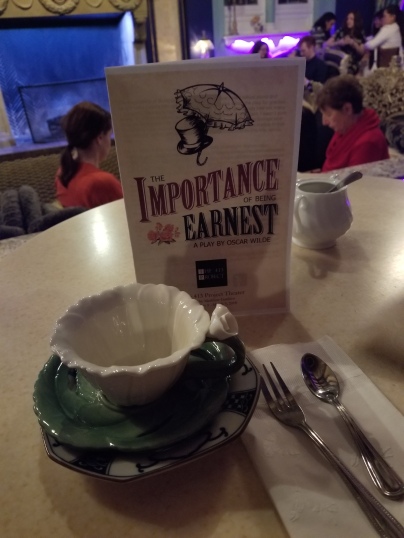 Even with the tea niggles, it was a wonderfully entertaining evening and a fine night out. The concept of this play and tea combination coaxes one into transcending out of the mundane into the stylized, mannered ideal of the past. The 413 Project Theater brings their productions to both Pasadena and San Diego There is a rotating cast. The Importance Of Being Earnest at Madeline Garden runs though March 3rd.  Go! 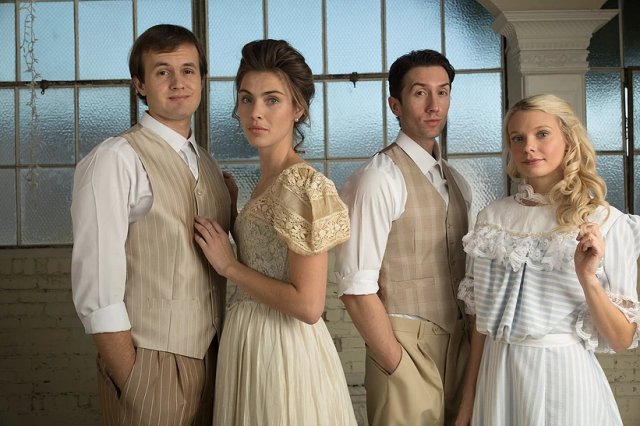 For more information and tickets https://www.the413project.org/la-earnest

2 Responses to The Importance Of Being Earnest At Madeline Garden