Forget the Past, Rewrite History… Outlander Returns This April!

Posted on February 11, 2016 by The Anglophile Channel

The news Outlander fans have been waiting and hoping for was revealed at last in spectacular style… with a stunning new official trailer and a dazzling photo of the Frasers looking resplendent in their French finery.

Starz – in association with Sony Pictures Television – has announced that Season Two of Outlander will premiere in the United States on Saturday 9 April 2016 at 9PM ET/PT. Additionally, it will premiere on Amazon Prime UK as well as Canada’s Showcase on Sunday 10 April 2016.

Outlander Season Two finds Claire and Jamie arriving in France, determined to infiltrate the Jacobite rebellion led by Prince Charles Stuart and stop the disastrous Battle of Culloden before it occurs. Thrown into the lavish world of French society, the Frasers must navigate political and social intrigue as they endeavor to alter the course of history. Their goals and actions weigh on the very fabric of their relationship, yet armed with the knowledge of the future that lies ahead, Claire and Jamie must work to prevent a doomed Highland uprising and the extinction of Scottish life as they know it.

The Frasers arrive in France…

Season Two is based upon Dragonfly in Amber, the second of eight books in Diana Gabaldon’s beloved and international bestselling Outlander series. As the story continues, Jamie and Claire must reconcile their knowledge with their individual and collective conscience… embarking on a thrilling yet dangerous mission to infiltrate the French aristocracy in the hope of preventing the decimation of Highland life and culture and ultimately saving those they love most. How will their actions affect the future? Is it even possible to rewrite history, or will the inevitability of fate prevail? These questions and the burdens they encompass are central to this new chapter. With the clock ticking and a sense of urgency pervading, the old world and the new world will collide with powerful consequences for all.

There are countless reasons to anticipate this new season, and with thirteen episodes, enthusiastic fans can rest assured that we will experience an incredible journey as we delve deeper into the epic story of Outlander. The love story of Claire and Jamie is at the very heart of what makes Outlander so special. This season will see the Frasers expecting their first child amidst a perilous atmosphere of secrets and deception at the French Court. With so many stressful factors weighing on their relationship and testing their devotion to each other, we are most looking forward to seeing how Claire and Jamie stay true to each other. The incredible performances of Caitriona Balfe and Sam Heughan have touched the hearts of so many and we can only imagine how they will convey such a wide range of powerful emotions this upcoming season. 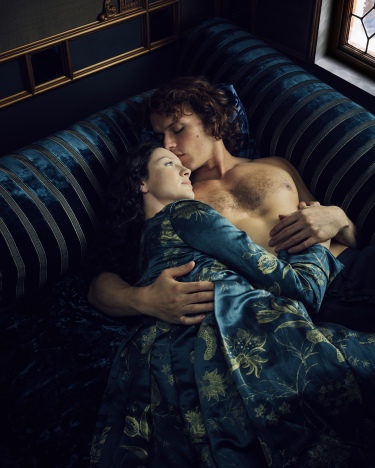 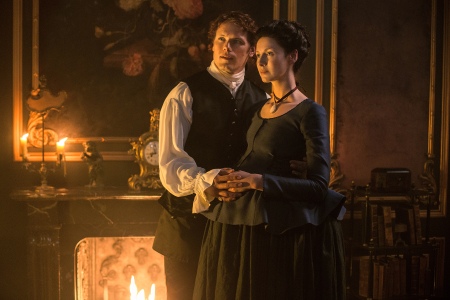 The Frasers have much to protect.

As the story unfolds, we are so excited to reunite with our favorite characters as their journeys continue. Adding an extra layer of enthusiasm, Season Two will also introduce a cast of compelling new characters – aristocracy of the French Court, Jacobite exiles, intriguing allies and enemies in Paris, and two individuals of exceeding importance to the Frasers and their future… Roger and Brianna. The brilliant writers and producers have amazed us all with their ability to bring the amazing characters of Outlander to life, and with so many new faces and personalities to discover, we’re certainly in for a thrilling ride!

Another component of Season Two that will be sure to dazzle the senses will be the stunning costumes created by the extraordinary Terry Dresbach and her talented team. Terry is a champion of the importance of how costumes relate to the individual characters as well as to world they inhabit and the overall context of the story. Season Two will showcase exquisite work and truly bring the characters and their world to life – from the streets of Paris, to the grandeur of the French Court, to the Scottish Highlands we have come to know and love. We cannot wait to feast our eyes on the sumptuous fabrics, superb details, and the utter authenticity and realism they create for the audience. For enlightening insight and an enriching glimpse into the creative process of Outlander’s costume designer, be sure to follow Terry Dresbach’s exceptional blog http://www.terrydresbach.com – her analysis and expert, behind-the-scenes perspective is not to be missed! Follow her on Twitter too at @OutlanderCostum and @draiochta14 for fantastic tidbits and interesting conversations with other fans! 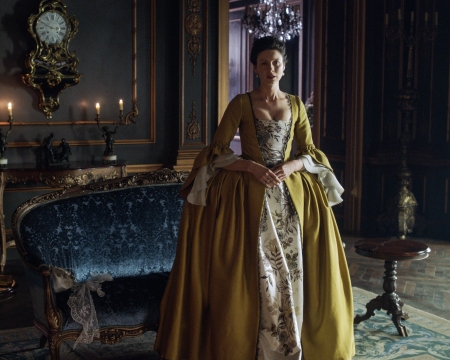 As more details and sneak peeks are sure to emerge over the next two months leading up to the premiere, make sure to follow the official Outlander Facebook Page as well as the official @Outlander_Starz accounts on Twitter and Instagram. The cast, crew, producers, and writers are engaging (and entertaining!) on social media, so be sure to follow their official social media accounts – compiled by the wonderful folks at Outlander TV News:

April will be here before we know it… and the journey continues!

2 Responses to Forget the Past, Rewrite History… Outlander Returns This April!