Posted on December 4, 2014 by The Anglophile Channel

Apparently “Genius Actor” and “Cumberbabe” are not sufficient enough titles to hold the interest of Hollywood’s hottest actor. Benedict Cumberbatch has now entered the world of Superheroes and mystic arts as Marvel announced today that he is to headline their next film, Dr Strange!  Let the fan art begin! 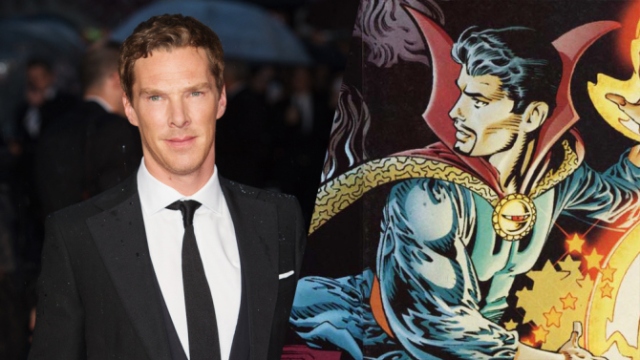 Meet the next Marvel Superhero!

The film, directed by Scott Derrickson with Jon Spaihts writing the screenplay, will follow the story of neurosurgeon Doctor Stephen Strange who, after a horrific car accident, discovers the hidden world of magic and alternate dimensions.

I hope the Cumberbabe is going to sport a rocking goatee!

Cumberbatch is no stranger to portraying highly intellectual individuals having won an Emmy award for his portrayal of Arthur Conan Doyle’s most famous creation, “Sherlock” along with the current release of “The Imitation Game,” where he is receiving heavy pre-Oscar buzz for his performance as brilliant mathematician and logician Alan Turing.  Also on the docket is  “The Hobbit: The Army of the Five Armies” as Smaug and the Necromancer which he is currently promoting.  For the role of Smaug, Cumberbatch stepped into the world of motion capture to bring the dragon to life. He will next be seen in Scott Cooper’s film “Black Mass,” the story of Whitey Bulger coming to theaters next September, where he stars opposite Johnny Depp and Joel Edgerton.

The recently engaged star’s other credits include the Academy Award-winning “12 Years a Slave,” “War Horse,” “Tinker Tailor Soldier Spy,” “August: Osage County,” “Star Trek Into Darkness,” “The Fifth Estate,” and “Parade’s End.” Benedict will be returning to the stage this summer in Hamlet at the Barbican with Lyndsey Turner directing. His last stage performance in Danny Boyle’s Frankenstein opposite Jonny Lee Miller awarded him the Olivier. So you know he has happy agents….

With “Doctor Strange,” Cumberbatch is just the latest actor to join the bold Phase 3 of the Marvel Cinematic Universe, introducing new heroes and continuing the adventures of fan favorites across multiple films.

Lady Anglophile…getting her superhero cape out!

Like Loading...
This entry was posted in The CumberWatch and tagged Benedict Cumberbatch, Dr Strange. Bookmark the permalink.