As nearly two decades of Peter Jackson‘s impressive dedication to his brilliantly epic Tolkien saga comes to an end, we follow “Richard Armitage’s Final Journey To Hobbiton”.  As the beloved actor, who breathed life into Thorin Oakenshield, makes his way to The Hobbit: The Battle of The Five Armies Worldwide Premiere in London and beyond, we shall share his journey with you here, through his own Twitter Pix and Posts…and other fun bits and bobs!

Enjoy and be sure to share your feelings about the end of this fantastic Tolkien journey below!

Bon Voyage Richard Armitage! Richard Tweets that his Final Journey to Hobbiton begins! I wonder what it’s like to fly on a plane that features your face on the side of its fuselage? Surely an extra bag of peanuts….

AND he’s going to take us with him! I’ll make sure to keep you updated on this page, so check back with us regularly!

Richard talks to Irish radio presenter Philip Molloy on The Picture Show at NewsTalk Radio FM. Richard revisits how he was cast in The Hobbit films by Peter Jackson and also talks about what he has coming up next in his career. What could it be?

Already being asked difficult questions…right out of the gate. Lucky reporter Maria Sallas of Telenoticias Miami is behind this one. Muy bueno!

The Elves arrive! Thorin is not happy.

Even Thorin gets a lie down once in awhile…Pretty cozy looking hotel room if you ask me 😉 Gorgeous photo by Sarah Dunn.

Brilliant shot of Armitage being interviewed on the Green Carpet with his face on the JumboTron behind him! How does he keep so humble? 😉

@TheHobbitMovie @WarnerBrosUK @wbpictures Try not to get a Big Head… pic.twitter.com/mgofvrtA8f

Richard never fails to stop and take time for the fans. It’s incredibly admirable and the reason why he has such a loyal following.

Signing autographs…and always with a smile.

Richard’s first interview of the night. Always with great composure despite being nervous just ‘five minutes ago’.

Richard commented that he was ‘excited, nervous and a little bit emotional’ on this milestone night that celebrated 15 years of Peter Jackson’s work.  Having seen the film, Richard said that it “rips your heart out.”  We have no doubt! We are hearing brilliant things about his performance as Thorin! Oscar, are you listening?

The incredible cast of  “The Hobbit: The Battle of Five Armies”…gathered together, perhaps for #OneLastTime. 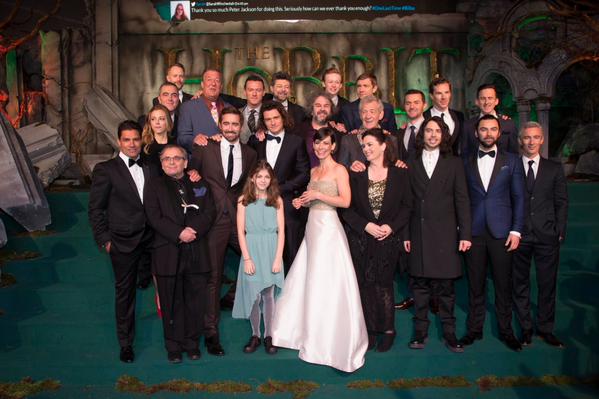 The cast of The Hobbit: The Battle of Five Armies

Richard thanks the Tolkien Society….

“@RoydTolkien @TolkienSociety pic.twitter.com/lJCObsnHb0” this was a night to remember. Thanks for your support Royd and Tolkien Society

A  memorable night indeed…for all of us!

After an exciting night that included the worldwide premiere of the most hotly anticipated film of the year…plus a bit of partying afterwards one can only hope…there was NO rest for the weary. Onward! Press Junket Day 2.

Entertainment reporters come in all shapes and sizes. Dwarfs are people too!

Press Conference with the cast.

In case you missed the press conference here it is in its entirety:

Meanwhile back in the US: The Hobbit takes over Times Square! As a NYC resident this must be a pretty heady trip for Richard to walk by in the morning on his way to coffee….

(Photo By: Rebecca Clark. Thank you for sharing with us!) 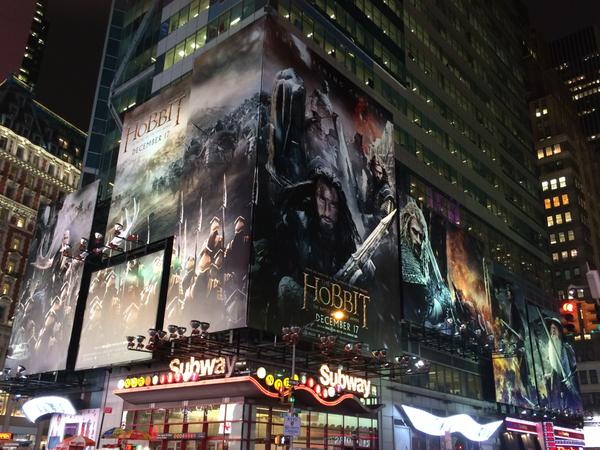 Subway clerk, “Can I see some ID for this purchase, Sir?”  Armitage: “If you’ll just walk outside and look UP….”

A Brief Detour For
The Crucible Premiere!

As if beginning a worldwide promotional tour for The Hobbit wasn’t enough…Richard pulled double duty on this day when he attended the premiere for his West End production of Arthur Miller’s The Crucible where he gave the most brilliantly intense portrayal of John Proctor I’ve ever seen.

Pulling a double shift on this day, promoting The Crucible.

If It’s Tuesday, This Must Be Belgium…. On yet another red carpet. For Christmas Santa is giving you…a break!

With the inspirational and true visionary, Crucible Director Yael Farber.

Bright-eyed and busy tailed! Headed for the Good Morning Britain Show! Somebody hand him some coffee, this boy has had no sleep! NOT that he looks it. (No emails please…)

Relections On The Final

As Richard head’s off to the fabuleux Paris premiere he has a message for Team WB:

@TheHobbitMovie @WarnerBrosUK @wbpictures thank you to the UK WB team for all your hard work. pic.twitter.com/xZ4tmFc5t0 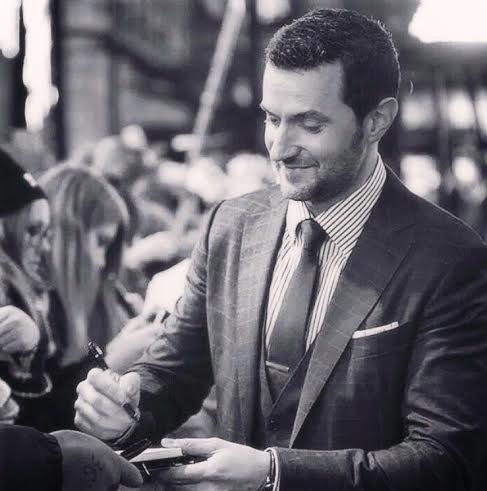 He’s like a throwback to the golden age of Hollywood…Cary Grant! Perhaps a rom-com next?

First Tweet from City of Love with La Tour Eiffel in the background. Beautiful!…the tower’s not bad either 😉

On the way to the LIVE Twitter session. If you have to be stuck in traffic…this is  not a bad place for it:

And now for the Twitter Q & A with WarnerBros France…in case you missed it:

RA: Yes, I met Yael Farber in New York on some projects. It will be a surprise.

RA: “Pilgrimage”, a film in which my character speaks 11th century French

RA: One as much as the other!

RA: I read the “Lord of the Rings” several times. I just finished “The Goldfinch” and it’s great.

RA: It was the lightest of all the costumes. But in order to wear it you had to use an electric drill. (Admin: This can’t be right…??)

RA: Stop throwing up, get up and continue to fight!

RA: I would make it more attentive to his nephews on the battlefield.

RA: Very moved, relieved…and I went to the toilet. (Ok..TMI)

RA: My socks of the day!

RA: Thorin but the pillows would be filled with bricks. (Funny!)

RA: Wine every time. (Somebody is going to owe me a bottle after this tour is over… 😉 )

RA: “The Phantom Menace” because I’m in it somewhere.

And that would be here:

I spy with my little eye…Thorin Oakenshield!

Q: What is your greatest weakness?

RA: I always have to be right.

Q: What are your favorite films that you’re not in. Any French films? Thank you very much.

RA: The beard was real.

RA: Gollum! One of my teachers imitated him like Andy Serkis.

RA: No socks or aftershave but an Astin Martin please! (Gosh, hope I kept the receipts…)

Q: You said you’d like to have more of a sense of humor. Do you think you did not have one before this adventure?

RA: Yes, Peter and Martin taught me how to laugh at myself.

RA: Two seconds, I’ll look…”Pompeii” by Bastille (And there goes the sales for that song!)

RA: Crepes and a glass of red wine.

RA: I brought it to New Zealand with me (wow, that must have cost a pretty penny….) it came back with me and is now with my brother.

RA: Gandalf in The Prancing Pony with a beer.

RA: Flute, violin (or cello??) and guitar. But not all three at the same time.

RA: He has the imagination of a child and a cup of tea that never ends.

Q: What is your favorite TV show?

RA: Two seconds while I search ‘jokes’ in Google

Q: The cast of Suicide Squad was revealed yesterday. If you were to play a superhero, who would you play?

WB: “That’s all for today. Thank you for your questions. See you soon”

Translation corrections invited…especially that one about the electric Thorin costume. 😉

With Peter Jackson and Martin Freeman

Wake Up! You’ve got a red carpet to get to!

NO rest for the weary: Or Dwarves, Hobbits and Tolkien Gods! 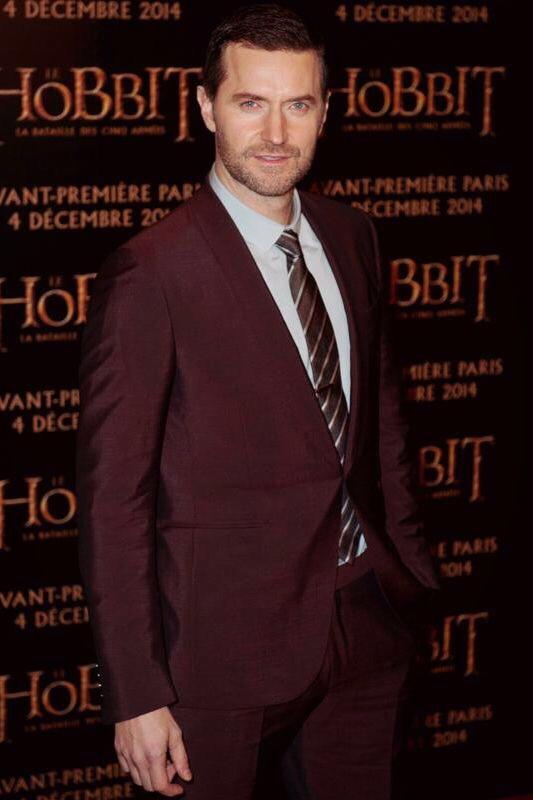 If this is Thursday it must be Paris…

Introducing the film in Paris. #UneDernièreFois

As Richard bids adieu to Paris, the strains of Samba music begin to echo as he flies down to São Paulo Brazil for yet another Hobbit promo! Cue Samba music…..

And hours and hours later….the arrival. Driving by the Monumento às Bandeiras on way to hotel…I hope room service is still available!

Richard made an honorary soccer player!

.@betomarden @wbpictures_br @TheHobbitMovie Day 6 Great to catch up with you again Beto. My first time in this beautiful country.

A Room With A View…

@TheHobbitMovie @wbpictures_br. I was interviewed by Gloin today in 'Portuguese' but with a Brazilian 'New Beat' pic.twitter.com/Dojgl1hva9

They clearly know Elvis is in the house!

And all too soon, Richard must bid farewell as he says “Vou sentir saudades”

@wbpictures_br @TheHobbitMovie @wbpictures To the fans and WB Brazil thank you for an amazing time in São Paulo. "Vou sentir saudades"

Now on to LA…and the final stop!

Richard was on hand to celebrate Peter Jackson’s receiving his star on the Hollywood Walk of Fame. A befitting honor for a visionary director.

@TheHobbitMovie @wbpictures #onelasttime so proud to share this day pic.twitter.com/MhFeWLPnro

No trip to LA would be complete without a chat with The Anglophile Channel!

Richard was kind enough to leave us with a special Christmas Message for the Fans and here it is:

Fire away! The King under the Mountain is here. @RCArmitage #AskThorin pic.twitter.com/nTqALfokIw

And here it goes! (Yeay, no translating for moi!)

.@MelindaFry They are red and black with white spots. A gift from Brazil! #AskThorin #TheHobbit

.@GirlFriday1035 My original copy of Lord of the Rings. It's a first edition. #AskThorin #TheHobbit

.@DazLobster It's surprising the debris that I found inside. Food, some change, bits of costume… #AskThorin #TheHobbit

.@gimlibae @RCArmitage Getting to do awesome stunt fights with a great stunt time. Hanging on a wire. #AskThorin #TheHobbit

.@cecilia_lea @RCArmitage If this is to end in fire, then we shall all burn together. Awesome song by @edsheeran – "I See Fire" #AskThorin

.@Back__Chat @RCArmitage Aligot – I just ate it in Brazil. If you eat it, it will change your life. #AskThorin #TheHobbit

.@isatbytheriver @RCArmitage It's a toss-up between flight or invisibility… I guess it would have to be flight. It's why I like to ski!

.@flybaby014563 @RCArmitage Being part of his star ceremony at the Hollywood Walk of Fame while being on this journey with him as Thorin.

.@ardonney Glue on the face. It's called telesis… I still have nightmares about it! #AskThorin #TheHobbit

.@deadthorin Thorin has never had a bath in his life! I prefer to shower. #AskThorin #TheHobbit

.@cielidiciniglia @RCArmitage I sing "Misty Mountains," of course… but only when I'm washing my armpits. #AskThorin #TheHobbit

@TheHobbitMovie @wbpictures #askthorin Thanks for your great questions. See you on the Red Carpet tonight. pic.twitter.com/UhvHyW5SQR

@TheHobbitMovie @wbpictures #OneLastTime thanks to all the fans for coming to the LA premier. pic.twitter.com/ZZVIuji2xE

It was a great night!

Final Leg of The Tour: NYC

@TheHobbitMovie @wbpictures #OneLastTime Final day of promotion. Hoping for a great opening weekend. Thank you for your incredible support

The Hobbit opened well and became the #1 movie in the world!

On January 17th, Richard travel to Beijing China for #OneLast Red Carpet opening!  Fans greeted him at the airport and sang, Misty Mountains. I can just imagine how beautiful that must have been!

@TheHobbitMovie @wbpictures Beijing thank you for coming to meet me at the airport ❤️ pic.twitter.com/jSVilW2eSt

Touring the Temple of Heaven with Peter Jackson 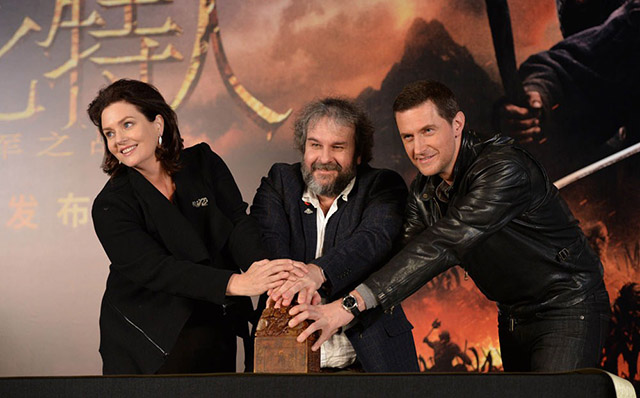 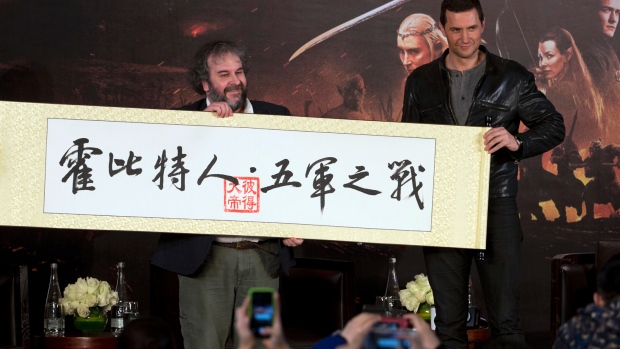 Director Peter Jackson, left, and actor Richard Armitage pose for photos while holding a Chinese calligraphy with the words: ‘The Hobbit, The Battle of the Five Armies’ during a press conference in Beijing, Monday, Jan. 19, 2015. (AP / Ng Han Guan)

@TheHobbitMovie @wbpictures very proud to be standing along side Sir Richard, Sir Peter, Philippa and a massive Bilbo pic.twitter.com/qQfjqhjwWF

@TheHobbitMovie @wbpictures Sunset on Beijing and our press tour. Thank you for your support and 谢谢 China pic.twitter.com/FS8OEfZQ4X

It was a fantastic journey, Richard. Thanks for taking us all on it with you!