Cheap & Easy! My Flight On Norwegian.

Posted on October 5, 2016 by The Anglophile Channel

Last minute plans had me scrambling to book a ticket in August. After many years of travel from LAX to London solely on British Airways, I followed the advice of friends and flew back to LA on Norwegian. Norwegian boasts a more fuel efficient aircraft which they say translates into lower prices and quicker flight times. The price of a coach ticket was comparable to the price one would pay in taxes alone plus I would have been using up my Avios points.  Because the Norwegian ticket price was so reasonable and I knew I would be lugging back suitcases, I upgraded to the premium cabin. An upgraded ticket also gets you two free checked bags, earphones, a blanket and meals as well as lounge privileges at Gatwick. Yes, I know. Gatwick. It was actually much nicer than I remembered. 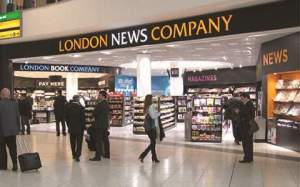 Gatwick was shiny and fun.

The Gatwick Express got me there in plenty of time from Victoria Station and I was able to purchase discounted tickets in advance online. Gatwick Airport was bright, modern and filled with great shops I certainly don’t remember from the last time I flew in decades ago. The lounge was a little crowded but comfortable enough without being plush and lots of power points to charge up the gadgets, plus a generous buffet, drinks both cold and hot, as well as delicious looking, complimentary meals you could order individually. DO THIS. Really– eat something! I beg you. But, more on that later….

On some of the lower cost airlines, I just haven’t felt as safe (and you know who you are with your crazy rules, your ridiculous weight limits and your sadistic, plastic seats) but Norwegian felt—solid. First impressions weren’t great. It was all very DIY. You have to check in at a kiosk, print your own baggage tags which you attach yourself before lugging the bags to the person manning the conveyor belt who backs up to let you heave your bags onto the scale before he decides if you have done everything correctly or must be punished. My stickers weren’t on properly but the luggage person, smiled, took his time, fixed my stickers and assured me all was well. He humanized the experience and calmed my nerves. My fears of being greeted at the aircraft by robot attendants sporting viking helmets were unfounded. The plane itself was spotlessly clean, modern and the crew was welcoming and professional. Norwegian’s premium cabin doesn’t compare with the little luxuries of other airline’s business class, but, for space, comfort and price, it beats premium economy hands down. I loved the cool touches like the windows tinting automatically “sunglasses style” to help ease you into the next time zone and a steady flow of fresh air to avoid the effects of jet lag. What was unusual is that I was never shivering as I often am on flights.  The cabin temperature was well regulated. A blanket came with my upgraded seat, and although I love to snuggle in a blanket, I would have been warm enough without it. 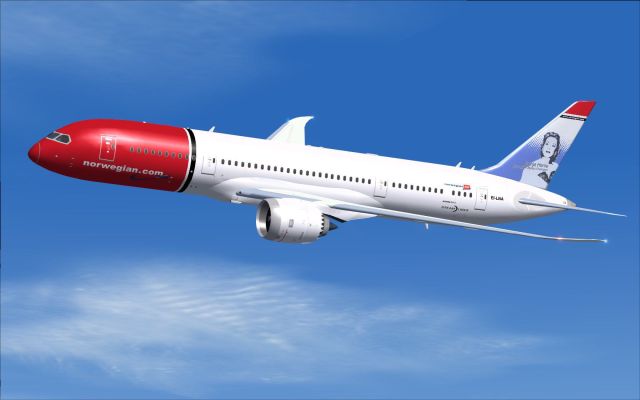 Streamlined for speed and fuel economy.

I had a wide bulkhead seat with so much legroom my feet didn’t touch the partition. There are limited entertainment choices on the personal screens, but I found something amusing to help pass the time. There are complimentary newspapers and magazines to grab before you board, including unusual choices like Conde Nast Traveler and The Lady. It helped that my seatmate was a lot of fun and our chatter helped the time pass quickly. The flight attendants were all friendly and capable. 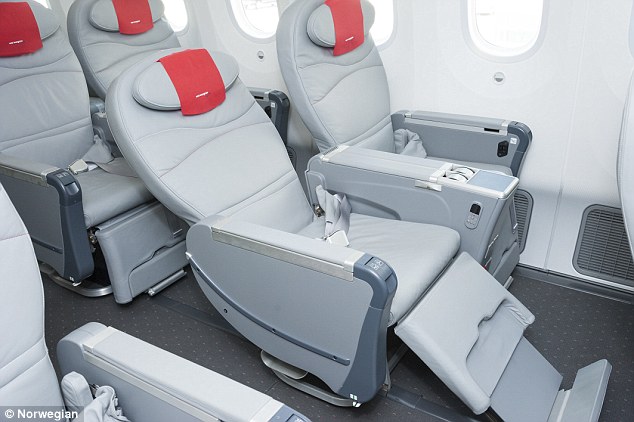 Lots of legroom. Spread out! Relax!

This was the first flight on Norwegian for both my seatmate and I, and we were, overall quite pleased with the experience and the price, but we were hungry. We each had pre-ordered vegetarian meals. Maybe that was the problem. The non-vegetarians seemed quite pleased. Our meals arrived in little boxes and were sufficient, if not completely filling. There was a tiny salad and a hot entree portion. Conforming with my constant complaint of most airline meals, Norwegian included the inevitable sad little fruit cup instead of proper dessert. I’m a vegetarian, not a follower in a cult of self-denial. Is that carrot cake made with pork chops? No? Then I want some! The offer of Baileys or brandy, tea and coffee after the meal was lovely.

Snacks were available to purchase with a credit card from your individual screen. My seatmate, though tiny, claimed the appetite of ten men so midway through the flight she ordered a veggie wrap which arrived quickly and icy, icy cold but tasty. We in the premium cabin were offered water regularly, but it was also available for purchase by the bottle. I sat back and fantasized about the breakfast to come. I got a dream-dashing breakfast salad and another fruit cup of despair. By this time, my seatmate and I could only giggle and talk longingly about the lapdog sized burritos we planned to gorge ourselves on when we landed. I should have investigated the snacks on offer more thoroughly and bought something despite my reluctance to eat between meals. 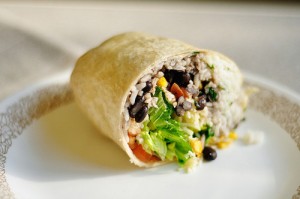 But the flight was smooth, we landed at LAX safely, even earlier than scheduled and I hit the ground running. Those jet-lag avoiding tactics used by Norwegian really worked. Would I fly Norwegian again or recommend the airline? Absolutely! Check them out if they fly from your city. Words to the wise: use the UK site to book your travel and save some money, use that money to upgrade, and for the love of Jamie Oliver, bring or buy snacks!

2 Responses to Cheap & Easy! My Flight On Norwegian.