Posted on November 4, 2014 by The Anglophile Channel

The early word on The Weinstein Company‘s The Imitation Game is that it’s headed for Oscar gold after enjoying a successful run at film festivals in both the US and UK, beginning with the Telluride Film Festival where it made its world premiere, followed by the Toronto International Film Festival where it won the top prize People’s Choice Award for Best Film, the Hampton’s Film Festival where it took the Audience Award once again…to its rave reviews at the recent 58th BFI London Film Festival. Harvey Weinstein seems to have the Midas Touch when picking out Oscar-worthy films.

The Imitation Game could be headed for Oscar gold!

The Imitation Game, which tells the story of World War II hero, Alan Turing, who cracked the German Enigma code,  stars Britain’s hottest export, Emmy Award-winning Sherlock actor Benedict Cumberbatch in what very well may be his first Oscar nominated performance. Cumberbatch has already been nominated in the Lead Actor category at the British Independent Film Awards along with Co-star Keira Knightley, and we expect more to come as the award season gets underway. 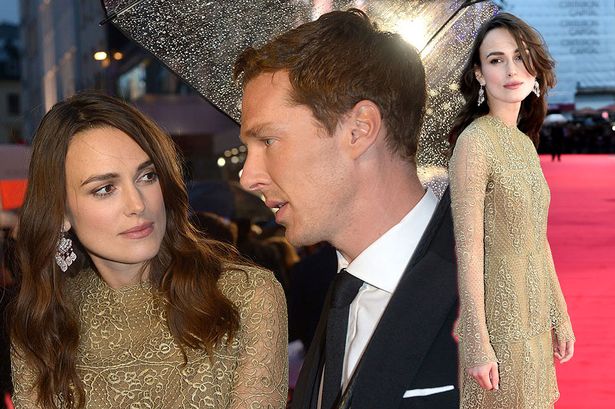 Adapted by Graham Moore from Andrew Hodges‘ book Alan Turing: The Enigma, the history-inspired period drama is directed by Morten Tyldem who spoke to us about how important it was to bring Turing’s story to the big screen and what made him think of Cumberbatch in the lead role. We also spoke with Imitation Game co-star Allen Leech and got his thoughts on his fellow castmate as well.

The British actor with the most unusual name is now on everyone’s lips after coming off the most amazing two years of projects starting with his acclaimed role as Sherlock Holmes, to last year’s villainous Khan in Star Trek: Into Darkness, headlining The Fifth Estate as Wikileaks founder Julian Assange, a small but note-worthy role in August: Osage County, voicing the role of Smaug the ferocious fire-drake in The Hobbit: The Desolation of Smaug to his role in the Academy Award winning film, 12 Years A Slave…Cumberbatch has been on fire, and it doesn’t look like things are going to slow down for him in the coming years. You would think it would create jealousy however, Cumberbatch elicits the exact opposite from industry peers and fans alike. Hear what people are saying about Benedict Cumberbatch and his amazing talents as an actor:

Despite international fame being thrust upon him, Cumberbatch is still very serious about his work. He spoke to BBC about his portrayal of British mathematician Turing, and what it meant to play him: “To be asked to play such a phenomenal human being – a true English hero – is a great honour and comes with a great responsibility,” Cumberbatch said,  adding that he knew ”embarrassing little” about Turning prior to signing on to the film. He continued, “That’s the tragedy of this man’s extraordinary life – his achievements and his heroism and his criminal prosecution are not well known. He should be on the front cover of text books.”

Cumberbatch on his way to Oscar!

The Imitation Game, which also features Mark Strong, Matthew Goode, Rory Kinnear and Charles Dance, opens in the UK on November 14th and in the US on November 28th.

Lady Anglophile….ballot in hand and ready to vote!