Posted on August 26, 2014 by The Anglophile Channel

They’ve called it a “cult favorite” for so long that there seemed to be a hush over the industry crowd at last night’s Emmy Awards Ceremony anytime a win was announced for the BBC/PBS hit series, Sherlock…that would be three for those of you keeping count…including what many thought was an “upset” in the Lead Actor category which went to Sherlock himself, Benedict Cumberbatch. To be honest, I think the upset is that it’s taken the Emmy voters this long to wake up and realize what they’ve had in this show! Cumberbatch beat out a crowd of heavy-hitters including Fargo‘s Billy Bob Thornton and Martin Freeman, The Normal Heart‘s Mark Ruffalo, Luther‘s Idris Elba and Dancing On the Edge‘s Chiwetel Ejiofor. A prestigious group indeed…but nothing to be upset about as this recognition was much deserved and a long time coming!

Not going home empty handed was Cumberbatch’s co-star, Freeman, who was honored in the Best Supporting Actor category for his multi-layered portrayal of Sherlock sidekick John Watson. 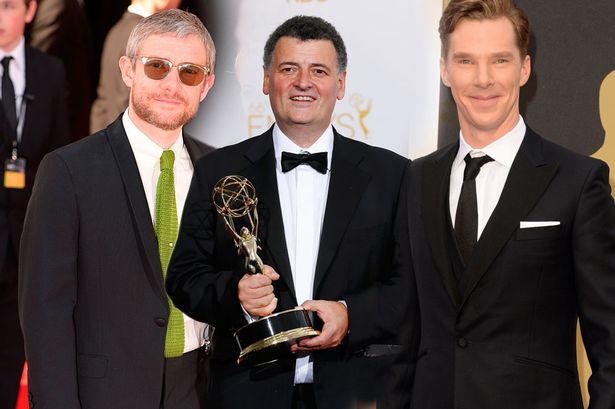 A big night at the Emmys for Team Sherlock!

Fresh off a record seven “shocking and surprising” wins, Co-Creator/Writer Steven Moffat had some very exciting news backstage, for fans of the super sleuthing series…but not before conveying how delighted he was at not only winning four awards at the Creative Emmys but his utter shock at the three major wins for himself, Cumberbatch and Freeman. He was certain that, after two years, 17 nominations and no-wins…their time had passed.  “We’ve  won outside of America and we thought that phase was dying down,” Moffat said. “As shows get older, they don’t win as often. We’re delighted that we’ve made it here and hopefully this will get more people watching the show.”

Get people watching? They’ll be chomping at the bit!  Especially after the tease he gave last night, when Moffat promised that Sherlock Season 4 will not only top Season 3 (a hard feat to be sure)…but will be “devastating”!! In fact, he added, “it is so devastating that our cast was reduced to tears.” when he told them their plan. 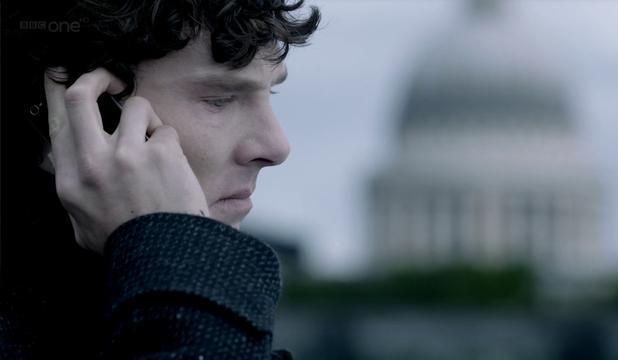 “Devastating” Sherlock season up ahead.

Moffat said that he and Co-creator Mark Gatiss are very excited about what they have coming up. Calling themselves, “a couple of fanboys.” (I knew I loved them for a reason…they’re fan geeks too!)  However, nailing down Cumberbatch and Freeman’s very busy schedules is “quite tricky…It’s like corralling everyone in a cocktail party.  We have to pitch (them) every year. But, we know what’s happening with Sherlock is unusual, so we’ll keep making Sherlock as long as it’s a good show.” Good show? It’s a great show!  All I need to hear is the opening strains of the Sherlock theme music and I get all tingly inside!

Moffat revealed that Series 4 could go before the cameras as early as January, right about the same time that he’ll be working on Doctor Who, with the first episode airing as a Christmas special in 2015. SO far away!

So a great night was had by all and I imagine everyone at Team Sherlock is celebrating in the UK today.  Steven said “We came out to LA thinking we would take nothing home but the memory of a great night. To have won seven Emmys in total is something none of us will ever forget.” 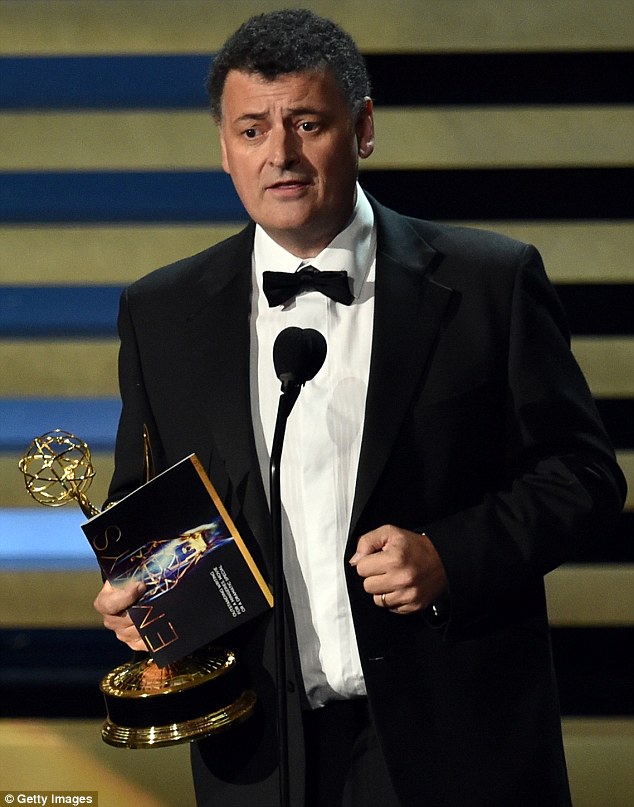 Well, it is well deserved Mr. Moffat and Mr. Gatiss as you have given us a show that we will ever forget…and now with all these Emmy wins I’m certain the rest of the world will be jumping on the Sherlock band wagon….which I’m not sure I’m all that pleased with as I’m feeling very territorial about my ‘cult show’. Still, I shall have my deerstalker cap in hand and ready to go come Christmas 2015!

Congratulations to the whole creative team at Sherlock!