Moments like these don’t come along very often in press conferences, most of which can be boring, staid and way too serious. During a Comic Con press conference for 20th Century Fox‘s “Kingsman: The Secret Service” starring Colin Firth a press member’s phone rang. Bad etiquette to be sure…but to make matters worse, the phone was slapped smack dab on the table right in front of Firth and his co-star Samuel L. Jackson who decided to ANSWER the call…in what became the highlight of the conference! (OK let’s not get carried away…my getting to actually TALK to “Mr. Darcy” and ask him a question was the highlight….but this was a close second!)

The guilty (and most likely mortified) press member didn’t immediately fess-up to it being his/her phone…which was all the better because Jackson riffed on this bit for a good few minutes making it the most entertaining press conference ever.  Take a look. (I love Colin’s reaction to this….) 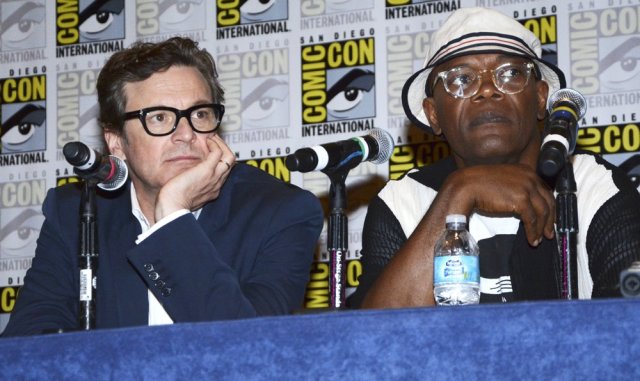 “Will someone’s phone PLEASE ring” these actors are seemingly thinking.

All in all I’d say it was a great press conference…I hope Colin and Samuel thought so too!

If you haven’t already seen the TRAILER for Kingsman: Secret Service, check it out here. Colin kicks some major arse!

Lady Anglophile…dialing up Colin as we speak!

Like Loading...
This entry was posted in Home Page Posts, Lady Anglophile Reviews & Other Bits and Bobs. Bookmark the permalink.