Meet The NEW Doctor Who When The TARDIS Comes To A City Near You!

Hang on to your sonic screwdrivers Whovians…The TARDIS may becoming to a city near you! And it will be carrying none other than the NEW Doctor Who, Peter Capaldi and his lovely travel companion through time Miss Jenna Coleman! 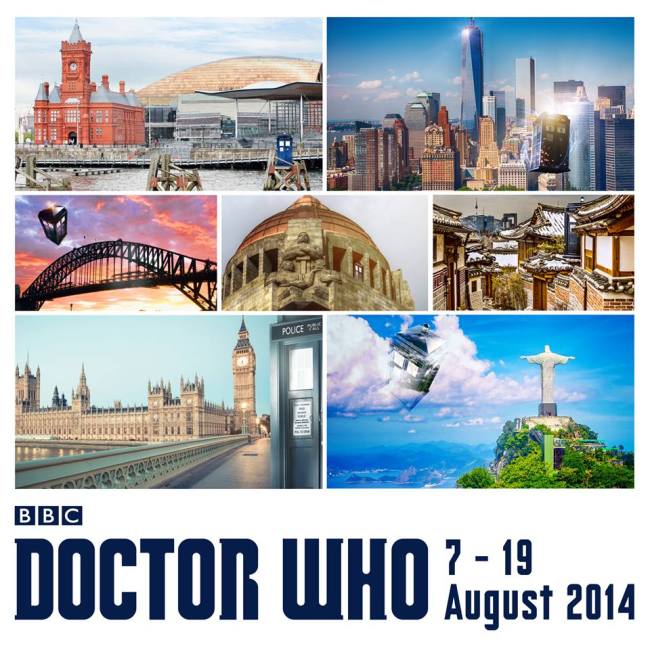 The EXCITING announcement made by the BBC:

Following on from last year’s global smash-hit 50th anniversary, BBC Worldwide announce a major global publicity tour to launch the new series of Doctor Who and introduce Peter Capaldi as the new Doctor. Doctor Who: The World Tour will begin in the UK on August 7 and finish in Brazil on August 19.

The tour marks the largest ever promotional undertaking in Doctor Who’s 50-year history and will kick off in Welsh capital and home of the series’ production, Cardiff, before taking in London (UK), Seoul (South Korea), Sydney (Australia), New York (US), Mexico City (Mexico) and Rio de Janeiro (Brazil). More details of the itinerary will be available from doctorwho.tv soon, as well as reports from the tour as it happens, which fans everywhere will be able to enjoy across social and digital platforms.

Peter Capaldi has commented on his excitement ahead of the tour: “It’s fantastic that so many people across the world love Doctor Who. After 8 months solid filming deep in the world of monsters, Jenna and I are thrilled to be heading for the Planet of Fans”.

Executive producer and lead writer Steven Moffat adds: “I’ve always thought we’d all be a lot safer if the Doctor conquered the world, instead of the Daleks. Now with Jenna and Peter leading the charge, it looks like it’s going to happen. I’ll be bringing up the rear to handle the exposition scenes, and maybe carry some bags.”

Doctor Who Series 8 is due to premiere in the UK in August. US broadcaster BBC America will transmit on the same day. Doctor Who is distributed by BBC Worldwide to over 200 territories.

*Due to production commitments, Steven Moffat will be unable to attend to the entire tour. The cities he will join the tour for will be announced soon.

Well you don’t need to ask this Anglophile twice! Allons-y!

Find out full info on where they’ll be landing on doctorwho.tv >> http://www.doctorwho.tv/worldtour

Like Loading...
This entry was posted in Home Page Posts, Lady Anglophile Reviews & Other Bits and Bobs and tagged Doctor Who, Doctor Who: The World Tour, Peter Capaldi, TARDIS. Bookmark the permalink.