The Queen in France to Commemorate 70th Anniversary of D-Day: Part 2

Posted on June 6, 2014 by The Anglophile Channel

It was in incredibly moving day on this the 70th Anniversary of the D-Day landings. Day Two of The Queen’s visit to France began in Normandy where she and The Duke of Edinburgh attended events that commemorated an event that changed the course of the Second World War. The Queen and Prince Philip first attend a service to meet Commonwealth veterans at Bayeux Cemetery, where she was joined by Prince Charles and the Duchess of Cornwall. Bayeux was the first French town to be freed from Nazi control. 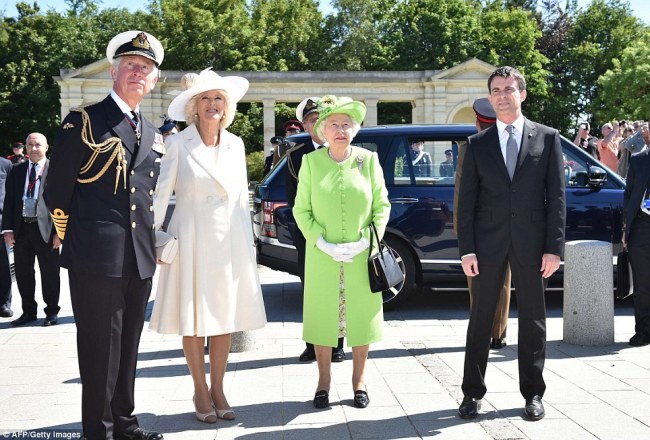 Prince Charles, The Duchess of Cornwall, The Queen and French Prime Minister Manuel Valls gaze up at the memorial as they arrive for the ceremony.

Prince Charles and Camilla, The Duchess of Cornwall joined The Queen at Bayeux Cemetery

At the British War Cemetery, The Queen took a moment to bow her head after placing a wreath of flowers at the memorial where thousands of British soldiers are buried.

The Queen places a wreath of flowers at the memorial 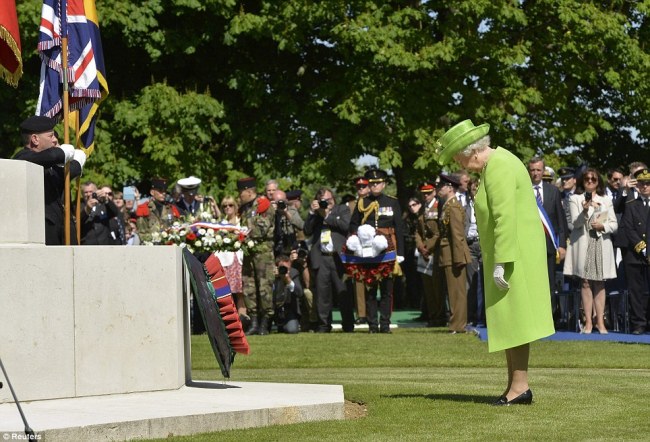 The Queen bows her head in respect for the fallen

The service was led by the Reverend Patrick Irwin, the Royal British Legion Chaplain to Normandy, who told the congregation: ‘Here in this cemetery we are reminded of the true cost of D-Day whose 70th anniversary we mark today. We pay tribute to the dead and welcome enthusiastically the veterans for whose courage and devotion we are most grateful. 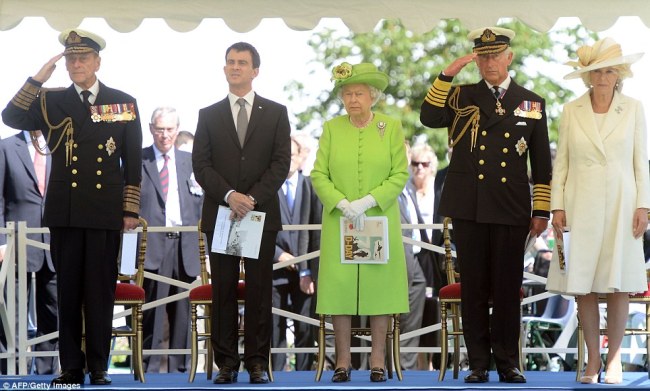 The Queen met with many D-Day veterans…many making their final pilgrimage to Normandy to remember and pay respects to their fallen comrades. A highly emotional day for all.

At the International Event commemorating the D-Day landings at Sword Beach, The Queen was joined by world leaders such as President Obama. Sword Beach was the entry point for thousands of British troops 70 years ago.

Part of the commemoration events was a re-enactment of the D-Day landings. I can’t even imagine how stirring that was to watch, and for those veterans in attendance…to re-live.

Stirring reenactments in honor of the 70th Anniversary 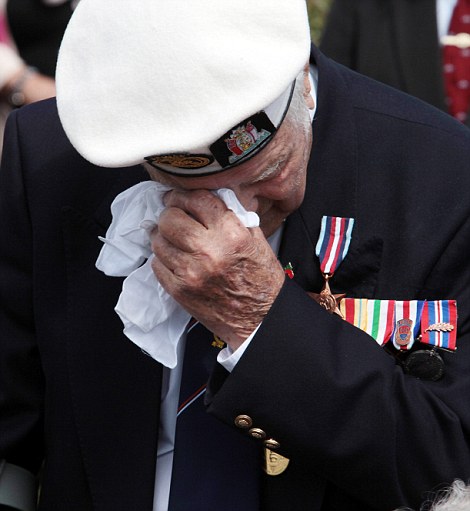 The Duke and Duchess of Cambridge, in the meantime, were at Gold Beach attending commemorative events and later a tea party with British veterans where Catherine was able to listen to many stories told first hand by men who lived through this historic day. 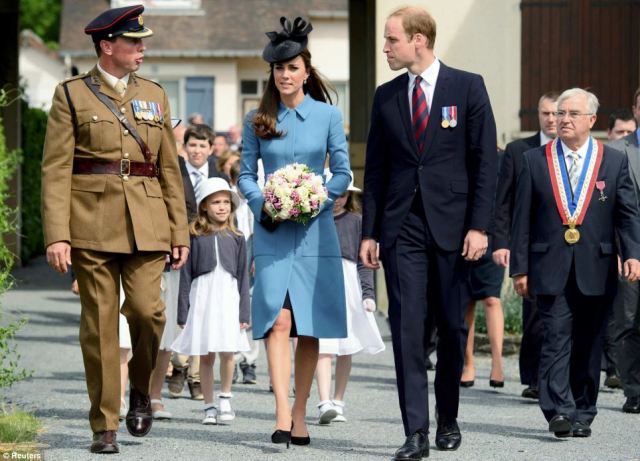 Looking lovely in a blue coat dress and holding a bouquet of flowers, Catherine The Duchess of Cambridge accompanies Prince William to commemoration ceremonies at Gold Beach.

In a stirring speech Prince William said of the fallen soldiers,  ‘They gave up everything for our freedom. They lie now together in the beautifully kept cemeteries that lie on the coast.’ ‘However, today is also about the young. It is vital for them that they remember the sacrifice made by so many.’

Prince William lays a wreath in honor of the fallen soldiers

Later at a tea party in Arromanches, north west France, Catherine spent her time laughing and chatting with veterans. 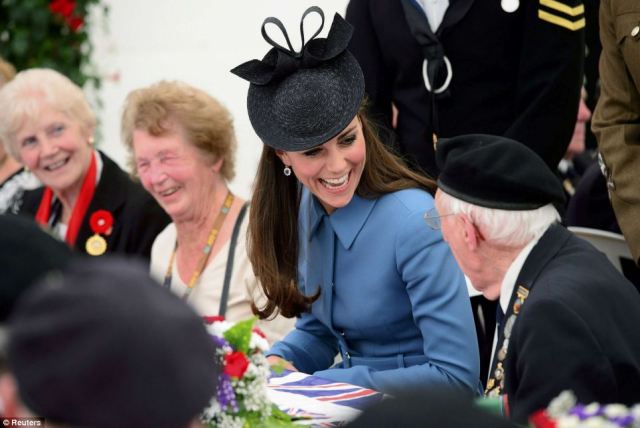 Following the busy day of 70th Anniversary commemorations, Her Majesty and The Duke of Edinburgh returned to Paris for a State Banquet at The Elysée Palace. 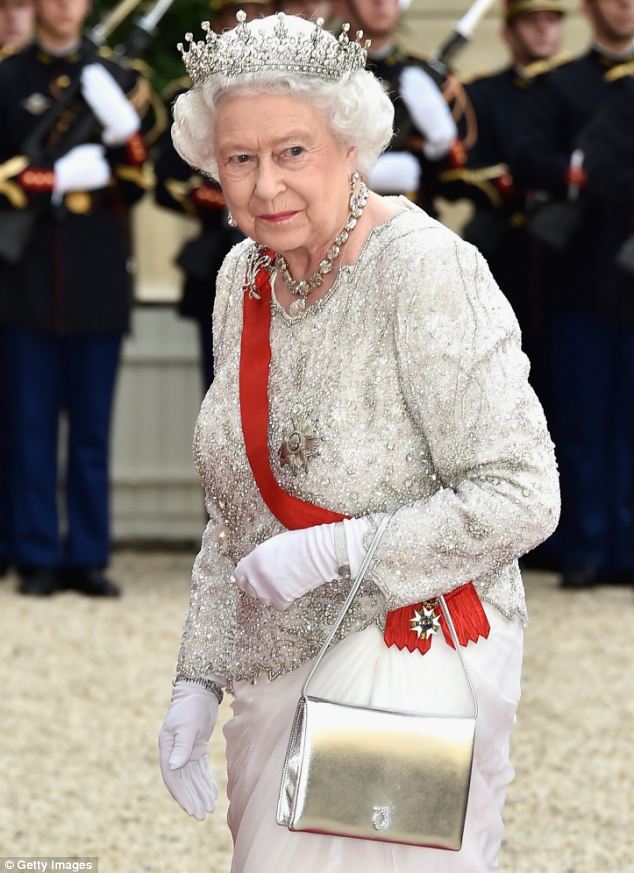 Truly regal! God Save The Queen! 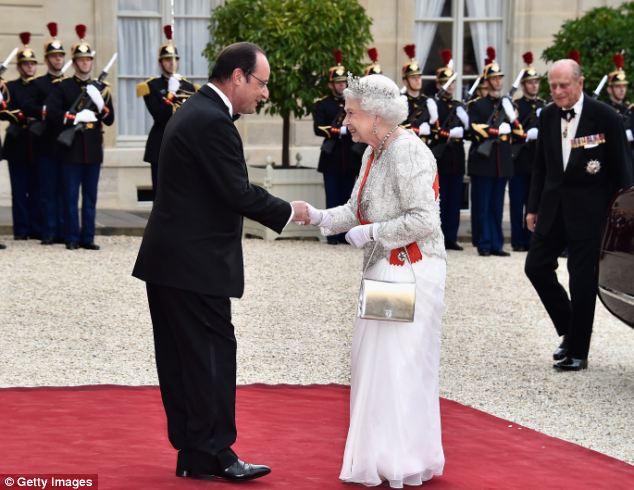 In a toast to The Queen, President Hollande said Her Royal Highness ‘personified the phrase Keep Calm and Carry On’…and of course, on this 2-day trip to Paris, she personified so much more..class, elegance, leadership…and an inspiration to all. 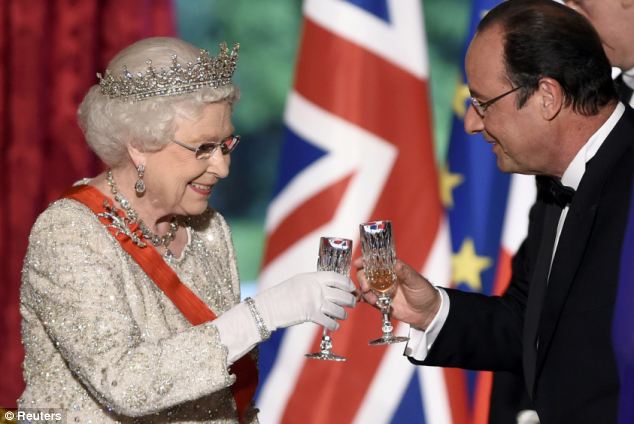 To the epitome of “Keep Calm and Carry On”! I’ll drink to that!

Watch a video clip of The Queen’s Speech here:

The 70th Anniversary of the D-Day landings at Normandy is now in the history books, but never far from our hearts or forgotten by those that lived through that terribly tragic but historic day. God Bless all who gave their lives and the vets that survived. 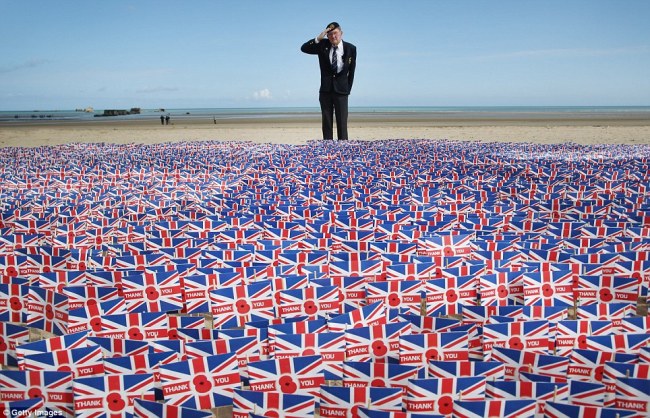 Like Loading...
This entry was posted in Home Page Posts, Rule Britannia! and tagged D-Day 70th Anniversary, The Queen in France. Bookmark the permalink.

2 Responses to The Queen in France to Commemorate 70th Anniversary of D-Day: Part 2