First Female Doctor Who in 50 Years!

It was the moment Whovians around the world had been anxiously waiting for, the announcement of who would be following in Twelfth Doctor, Peter Capaldi’s footsteps. The BBC both thrilled, and shocked, fans when they revealed that British actress, Jodie Whittaker, would be making television history by becoming the Thirteenth Time Lord and the first female ever to play the role in the show’s remarkable fifty year history.

Meet the NEW face of Doctor Who, Jodie Whittaker!

Many names had been floating around and last minute rumors were beginning to spread like wildfire. Besides Whittaker, some of the names being bandied about were Kris Marshall (Love Actually), Pheobe Waller-Bridge (Broadchurch), Olivia Colman (Broadchurch), Hayley Atwell (Agent Carter) and Andrew “Honey, you should see me in a crown…” Scott (Sherlock). 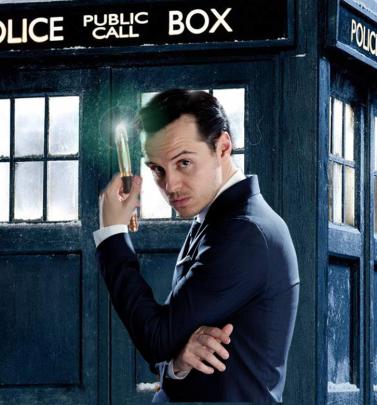 Honey, you should see me in a TARDIS! (Photo via Pinterest wefollowpics.com)

Personally, after listening to the rumors, I thought Marshall was the front runner and would have been a great choice as the Doctor. I pictured him as goofy Doctor, like the Sixth and Eleventh Doctors, and bringing more lightness to the show. Also, he was ginger, something The Doctor longed to be – so, it was destiny! 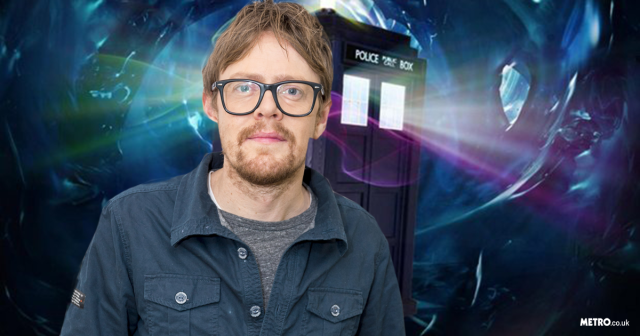 The Doctor has always wanted to be ginger! Kris Marshall would have filled the bill.

Many of us believed that we would all be waiting until this Christmas to finally meet the new Doctor. That’s eternity to a Whovian!  Thankfully, the BBC took pity on us and posted a teaser on Twitter, but that only served to tease us even more as we screamed and held onto each other after a series of cryptic hints ended with the promise that we’ll “Meet the 13th Doctor after the Wimbledon Men’s Final”. This was posted July 14th, just two days before the news we’d all been yearning to know would be broadcast around the world!

Instead of biting their fingernails or counting the stars in the sky, fans reacted in true Doctor Who fashion by investigating the teaser in depth, creating flow charts, elaborate diagrams, and color coated bar graphs. Sure enough, many clever Whovians found clues as to the Doctor’s gender hidden within the teaser. For example, the teaser featured The Statue of Liberty (who is female), the Sahara Desert (“Sahara” – a feminine name), an iPhone (which everyone connected to Siri, who was originally voiced by a woman), and the Prime Minister’s door (the current PM is a woman). Whovians began to theorize that the next Doctor would in fact be a woman!

Of course, Whovians have a Yoda-like intuition when it comes to all things Doctor Who therefore few were surprised when, on July 16, BBC creatively announced the Thirteenth Doctor in a video. In it, a person, wearing a dark hood over their head, walks through a thick forest and holds out the Tardis key in their hand. The person takes off their hood and it was revealed in 0.5 seconds that the Thirteenth Doctor will, in fact, be portrayed by a woman!  Jodie Whittaker, star of the hit ITV series, Broadchurch, was the lucky actress chosen as the first female to play this iconic role in fifty-four years of Doctor Who history!  The newly-minted Doctor  sees her Tardis in the distance and walks towards it with a genuine smile on her face. From that moment, the Thirteenth Doctor departs on her journey to change the course of Doctor Who forever.

Welcome to the future! The NEW face of Doctor Who!

Millions of jaws simultaneously dropped to the ground at the moment of unveiling. While this can be seen as a positive reaction, there were still variations of “shock” in the Whoniverse. Believe it or not, there had been mixed feelings with making the Doctor a woman. Some believe a female Doctor will change the show’s focus and lose its traditional adventurous feel. Others believe that Jodie Whittaker, a seasoned and talented actress, will bring a creative, multi-layered, intriguing Doctor to the table proving that, in the end, gender does not matter.

A seasoned dramatic actress, Whittaker will bring strength to The Doctor.

Opinions flooded social media, contrasting views immediately clashing, and battles were beginning to form. Many people don’t like change. It always takes a bit of adjusting to shift to a new Doctor – no matter the gender – especially after you have been attached to the current one for such a long time, but this was different. Like other iconic characters we’ve come to know and love: James Bond, Sherlock, Poirot etc., we all had been used to The Doctor being portrayed as a man, for over 50 years, and now fans had been thrown a curve ball and were being asked to adapt. So what was the fan reaction?

Some fans have welcomed Whittaker with open arms!

In the midst of this war between Ms. Who, Mr. Who, and Gender fluid Who – Doctor Who alumni have already tweeted their congratulations and support to Whittaker with great positive energy! 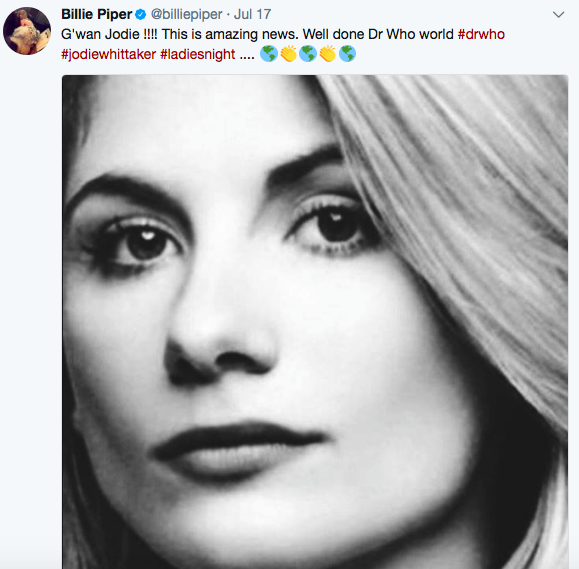 We all loved Karen Gillan as Amy, and Karen loves Jodie!

Arthur Darvill (Rory Williams) is all for a female Doctor!

In short, Doctor Who alum have got each other’s backs. It’s like they’re inviting a new member to the family and I love that!

I was thrilled to get to chat with some classic Doctors: Peter Davison (5th Doctor) and Colin Baker (6th Doctor) and Sophie Alred (Companion to 7th Doctor) who gave me their thoughts on our new female Doctor:

and NO better endorsement can be given to Ms. Whittaker than the seal of approval that came from DW showrunner, Steven Moffat, and DW writer, Mark Gatiss who gave us the definitive take on the Doctor being a woman:

Much loved, outgoing Doctor, Peter Capaldi, also shared his thoughts, “Anyone who has seen Jodie Whittaker’s work will know that she is a wonderful actress of great individuality and charm. She has above all the huge heart to play this most special part. She’s going to be a fantastic Doctor.” 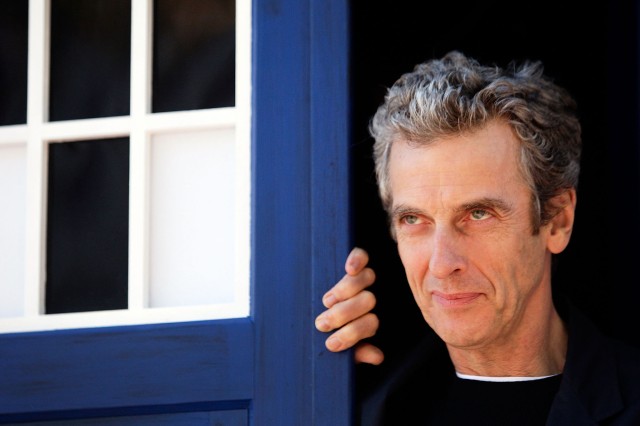 A shining endorsement from the brilliant 12th Doctor, Peter Capaldi.

A Word From The New Showrunner

As everyone knows, the Doctor’s gender isn’t the only thing changing in the Whoniverse. It was announced earlier that longtime showrunner, Steven Moffat, decided to hang up his sonic screwdriver and hand over the keys to the Tardis to Chris Chibnall, the BAFTA-winning show runner of the hugely successful ITV series, Broadchurch (of which Whittaker was the star).

The new master of the Whoniverse, Chris Chibnall.

Chibnall’s vision for the new direction of the show is something he had always planned on,  “After months of lists, conversations, auditions, recalls, and a lot of secret-keeping, we’re excited to welcome Jodie Whittaker as the Thirteenth Doctor. I always knew I wanted the Thirteenth Doctor to be a woman and we’re thrilled to have secured our number one choice. Her audition for The Doctor simply blew us all away.  Jodie is an in-demand, funny, inspiring, super-smart force of nature and will bring loads of wit, strength and warmth to the role. The Thirteenth Doctor is on her way.”

What Does Jodie Whittaker Think?

What does the woman-of-the-hour have to say about making television history? Whittaker has revealed that, “It feels completely overwhelming, as a feminist, as a woman, as an actor, as a human, as someone who wants to continually push themselves and challenge themselves, and not be boxed in by what you’re told you can’t be.”

In an interview with BBC, Whittaker was asked “What do you want to tell the fans?”  She answered with, “I want to tell the fans not to be scared by my gender. Because this is a really exciting time, and Doctor Who represents everything that’s exciting about change. The fans have lived through so many changes, and this is only a new, different one, not a fearful one.” 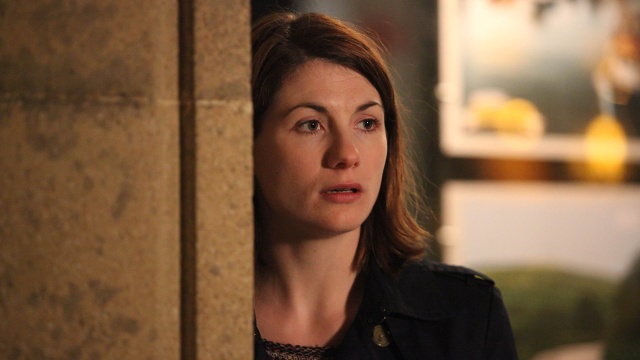 Whittaker, a Doctor for a new generation of Whovians.

My Thoughts On The Matter

I have put much thought into the whole idea of a female Doctor long before Whittaker’s casting was announced. Here is what I believed beforehand. Word had been going around that the next Doctor might be a woman. And a female Doctor would be no surprise due to all the winks and nudges throughout season ten. In truth, I thought a female Doctor wasn’t necessary. There had already been a great amount of female representation in the series through the Doctor’s memorable and strong companions. One may argue that companions are viewed as the Doctor’s “assistants” and thus relegated to the status of “side-kick”, I beg to differ. From Martha Jones to Donna Noble to Clara Oswald, the show has shown female strength in a multitude of ways. Companions have reigned in the Doctor, confronted him, steered him toward the right decisions, and have shown great independence with the decision to leave him. Not only are these women female, they are human, too. The show proves that even a human female can be stronger and wiser than a thousands of years old alien male.

However, I’ve always remained open to the idea of a woman Doctor as well. After all, it is 2017 and women have proven that they can carry a film (Wonder Woman) or television series (Big Little Lies) to great box office or ratings success.  It’s time for Doctor Who to change a bit, too, unless you want the same storylines reoccurring over and over again. Doctor regenerates, Doctor finds a normal Earth girl, Doctor travels with Earth girl, Doctor falls in love (or becomes BFFs) with Earth Girl , Doctor loses Earth girl, Doctor wallows. However, that’s getting a bit old, isn’t it? Personally, I’m ready for a little girl power to infuse this journey with strength and excitement and with Whittaker at the helm of the TARDIS, I’m sure that’s exactly what we’re going to see.

Many little boys have grown up with Doctors like David Tennant and Matt Smith as their role models, and strive to be like them.  Now, little girls can look up to Whittaker’s Doctor, with the knowledge that they too can be Time Lords who save the world!

I conclude with this simple opinion (and maybe even suggestion). I respect everyone’s opinions, but I’ve seen some comments on Twitter that have really jumped to unfair conclusions. We haven’t even seen Whittaker’s first episode, so to judge so quickly and harshly is pretty unkind. This is such an amazing opportunity for her, and we should be supporting her through this next year before Capaldi officially gives her the Tardis key. Let’s give Whittaker a chance, because if you have seen the television show Broadchurch (which starred David Tennant, the Tenth Doctor), you know she is a phenomenal actress.

New Doctor Who Showrunner, Chris Chibnall comments on the announcement.

No matter what gender, as long as the actor or actress that portrays the Doctor is committed, passionate, and loyal to the character, I will always be satisfied. I am  sure that Whittaker will bring all of those characteristics to the role.

Congratulations, Jodie Whittaker! Welcome to the Whoniverse! I wish you the best of luck during your stay, and I cannot wait to see you everything you bring to Doctor Who Season 11! 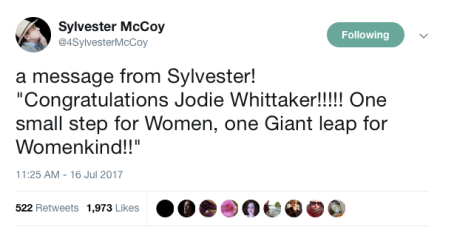 A message from the 7th Doctor

Juliette  is a Junior at Orange County School of the Arts. Her work can also be seen on Los Angeles Times High School Insider and Watch What Happens OCSA.