Glad to see nepotism is alive and well in Hollywood and especially amongst the British, who (according to my showbizzy Brit friends) have said casting family members in your project is “not on!” Well luckily for English actor Aaron Taylor-Johnson it IS “on” because according to Access Hollywood, director Sam Taylor-Johnson has revealed that she’s cast husband Aaron in the highly anticipated film adaptation of the bestselling E.L. James novel, “Fifty Shades of Grey.” No word on who Aaron will be playing in the film yet. 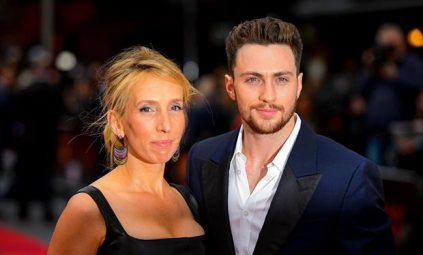 Aaron, currently appearing in Godzilla, is certainly cute enough to have taken the lead role of Christian Grey. Not that, (as director), Sam would have fancied watching her husband tied up in bed doing all those erotic scenes. (Not that I’ve read the book, I’m just assuming someone is in bed..at some point and there’s rope involved…or a nice designer tie.)…she’s no dummy. He’s probably playing the pizza delivery guy. Although in a movie like Fifty Shades of Grey even the pizza guy can end up in a steamy compromising scene. If I were Sam I would have simply told my hubby that the project has been cast but he can work craft services if he’d like.

Fifty Shades of Grey stars Jamie Dornan and Dakota Johnson with a screenplay by Kelly Marcel. The film is due out Valentine’s Day 2015.  Hmm, now that would be a weird first date to go on….

What would YOU like to do for Valentine’s Day?

1 Response to Fifty Shades of Nepotism